Some thoughts after running the marshmallow challenge with kids
Sometimes I get the opportunity to try things that I never done before, or didn’t think that I would dare. Do those things if you get the chance. Always do them! I never regretted taking one of those opportunities, after they are over. In this case I got the opportunity to talk with a bunch of school kids (14-16 year olds) about Lean, experimenting and how to iterate ever faster by improving your process. It was quite the experience and I wanted to share some highlights of the time I had together with them.
Agile, Lean, Marcus private

Sometimes I get the opportunity to try things that I never done before, or didn’t think that I would dare. Do those things if you get the chance. Always do them! I never regretted taking one of those opportunities, after they are over.

In this case I got the opportunity to talk with a bunch of school kids (14-16 year olds) about Lean, experimenting and how to iterate ever faster by improving your process. It was quite the experience and I wanted to share some highlights of the time I had together with them.

I have a friend, Tristessa, that is a teacher in an international school in Stockholm. She’s a brilliant horn-player and we play in the same band. One day in our rehearsal she told me about a course about Product Design that she was running in her class (SO COOL) and her students had many of the challenges that I’m facing each day at work; needs for experiments, need to have a flexible process, need to focus on goals rather than on activities, etc. etc.

She knows some about what I do and have taken interest in so she invited me to come and talk with her class about “lean, agile and kanban-stuff”. I’ve been there before talking about TDD and that was great so I took another chance.

We talked a little bit and I decided to do the Marshmallow Challenge with them and then talk a little bit about kanban to help them to get their process under control. This post is mainly about the things I learned during the marshmallow challenge exercise

The Marshmallow Challenge is a game that has been played as a team building exercise but also is a great learning tool for design thinking and getting a product mindset focusing on learning and experimenting.

The rules are deceptively simple (see the picture below)

There’s a catch though: the marshmallow is much heavier than you think. So heavy in fact, that when you put it on a spagetti - the straw breaks.

This is important and also the reason the most common result in the game is actually zero cm. Lower than if you would just put the marshmallow on the table flat (ca 2 cm high).

What I observed and learned

I’ll try to keep my observations per team, because they all had very different approach and results.

Team 1 (random number assigned by me for clarity) went into their area and the first thing they did was to put the marshmallow on top of a spagetti straw. Just one. Holding it. By doing this they saw how the spagetti straw bent and wiggled under the weight. 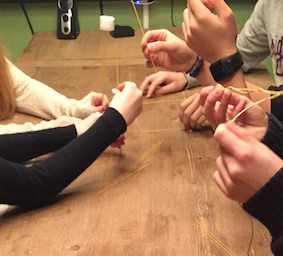 At that point I told their teacher:

That team is going to win

After about 2 minutes they asked me if they could be measured many times (Yes, of course). And 30 seconds later they asked me to measure for the first time (32 cm).

They then called me two times more for measurement before any other team even called me once. Each time they had a little improvement and bettered their result somewhat.

At the end of the game I’ve measured their creation 4 times and been called one time extra since they put on some nice decoration and just wanted to show me that it was pretty.

They won, with a final height of 56 cm. Ca 20 cm higher than the second placing team.

The reason for their success, I think, was that they were experimenting and learning what worked based on their previous experience.

A fun thing happened at the end when they thought that they were done: one guy squashed the marshmallow and flatten it out. They then rolled it into a tiny pin and wrapped that around the straw. Reaching another 8 cm higher.

Very creative thinking based off their experiences; they had time to do that and already was happy with their result.

The second team took a very different approach. They decided (together) that they needed a sturdy structure to support the weight of the marshmallow and built a big strong square of straws.

It was quite impressive to see it being built… but ultimately it was not sturdy enough. Once (after 14 and a half minute) they had something that they even thought would support the marshmallow it fell over on the side.

That was such a big disappointment that they gave up more or less. It was not improved by the fact that the structure stood for a short period of time and then I was “too slow” to measure.

Funnily I asked them what they thought that they achieved: “How high do you think it was?”. This was just to defend myself but turned out to show something else that I didn’t think off.

Their guess was ca 15 cm lower than the worst result we got. They could not even think that they could reach the heights of the others in the room.

Team 3 had a very long period of time where absolutely nothing got done. They were turning the straws over, trying out some tape or even cracking the straws into smaller parts - without really knowing why.

After about 10 minutes one girl just grabbed a bunch of straws, creating a tipi-kind of structure. They wrapped some tape around it and then put the marshmallow on top. Laughing at their creation. 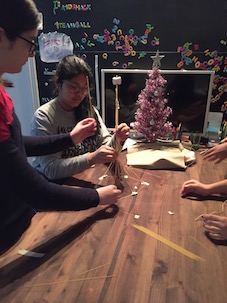 I swung by and asked if I should measure it, but they said:

No - it’s not tall enough to be measured

It was like they thought that it had some kind of minimum limit before I would measure it. I still measured it and it was actually 31 cm, one cm lower than the first result of the team that ultimately won.

They didn’t have time to do any more experiments.

This team was following the structure for excellent school work in group to the letter.

After about 12 minutes they realised that the structure would crack under the weight of the marshmallow. They scrapped the idea and just used the bottom 30% of the structure.

At this point something amazing and heartwarming happened; in the background of the group a kid sat very quietly. He said nothing but as the tests of the initial idea started he stepped forward and looked in, said “That will not work” and then sat down again.

When the tower fell over he stepped forward again and started to build on top of the structure that was left. He managed to build another structure on top and then showed the rest of the team how he thought that it would work.

He added the marshmallow on top and they reached 48 cm. At that time the highest structured recorded, only to be broken by the winning team (and by merely 8 cm more).

Although he had been in the background so far, this caught his attention and he was the one that got the team to get a result at all, when the others were close on giving up.

Team 1 adopted a very agile, experiment-driven approach which was perfect in this case; where the best solution could not be known in advance. This very much resemble most interesting business situations I’ve been in - we cannot know what works best in advance. This team won and had a lot of fun in the process. This was the only team that did decorations on their tower and they showed great pride in their creation.

Team 2 - is the archetypical waterfall project. Grand and well laid plans that they stuck to throughout the project, a big crisis in the end that they couldn’t recover from, ending up in zero result. And in fact even had an impact on what they even could imagine as a good result (!). This team came in last with no result recorded.

Team 3 - was held by their assumptions on the task at hand. They were so nervous of making something that was not good enough that they didn’t even want to try. When they finally did try they scored something that was just a fraction higher than your ordinary spagetti straw. They came in third.

Team 4 - followed the process over following what they thought would work. But when the crisis came the had the strength to go out of the problem, learn from them and become something better than they initially thought they could be. They came in second with a result that for a long time was the leader.