It’s been a while since I blogged. Twitter is taking over. I compensate that with a major blog post.

I written about the project I’m in right now a couple of times before and to make a long story short; we don’t have any requirements! We only have the existing application which we are to “convert” from VB6 to VB.NET. 1:1 is the mantra – which is to be understood as: functional the same.

I have suggested for the team that we work with BDD (or ATDD if you like) to create the requirements as we go. They liked it. A lot!

To not let this post grow totally out of control, I leave the description for that process to another post.

To put my money where my mouth is and show them how it should be accomplished. This blog post is that description.

The best BDD-tool I’ve seen for the .NET platform is SpecFlow. It’s a very active open source project that gets more and more attention in the community.

We’re going to build a fat client (remember them?) and have decided on building it with WPF and Prism 2 (or 4 was it?) .

Let me right now say that I don’t, yet, know much about Prism and my example in this post is NOT an tutorial on how to build great Prism-applications.

The missing part in the solution puzzle was given by the White project. From their website we learn:

White is a framework for automating rich client applications based on Win32, WinForms, WPF, Silverlight and SWT (Java) platforms.

Well – perfect fit, if you ask me. Also – the creators of Prism has used White to acceptance test their own stuff.

I’ve followed the SpecFlow-project for a while now and they have increasingly supplied us with great examples and tutorials. I recommend you check them out. I haven’t seen to much that isn’t web application though.

Likewise the Prism project comes with lot of examples. See their download and learning pages. This description of a Hello World example helped me get started.

White also have some useful examples on their Codeplex-site. I also found this post by Ben Hall useful.

How I did it

Let’s, finally, get down to business. I’ll take this step by step but not supply every detail, for the sake of brevity. The complete code sample can be found here.

The example is very simple calculator. Yes, I know that the example not is a fully fledge application but it proves my point.

Through the example I will use the standards of my current project, which mean VB.NET.

First I downloaded everything I needed:

I then compiled Prism according to the ReadMe.txt and the “Desktop only - Open Composite Application Library.bat”-file, which put the files in \CAL\Desktop\Composite.UnityExtensions\bin\Debug-folder which puzzled me for a while.
Could not help myself to smile when 431 tests passed. Gotta love TDD!

In this root project folder I created a lib-folder and copied all the Prism binaries (from CAL\Desktop\Composite.UnityExtensions\bin\Debug)

I then moved all the White binaries to the lib-folder as well. My god – it was many – I will not use all of those…

In my solution I created a lib solution folder and pulled all my binaries into Visual Studio. That’s probably not need but I like to see everything I’m using in the solution.

I now turned to the SpecFlow part of things. As this project will serve as a demonstration for my project I wanted to follow my current customers requirements (VB.NET, MSTest etc).

I therefore created a Test-project called Marcusoft.BDD.Calculator.Specs. DON’T try to create a Class library and convert it into a MSTest-project. You will only fail…

In the project I created a folder called Steps and removed the ubiquitous UnitTest1.vb-file. I also added a reference to TechTalk.SpecFlow.dll from my lib-folder.

One cool feature with SpecFlow is that you can put some rules for how your features are to be written in configuration. That’s stuff like test runner and other technical configuration but also the language used for you features and scenarios. This will give you compilation errors for typos in your requirements! I actually scream of joy when that happened.

So I added an App.config with the following content: 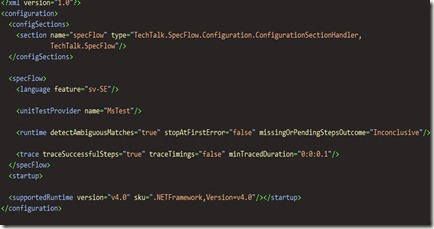 I used sv-SE to enable Swedish for my language setting. But I switched to en-US to get English for this post.

Now I created a .feature-file to get my first SpecFlow-feature. The feature is called: SumTwoPositiveInteger and looks like this: 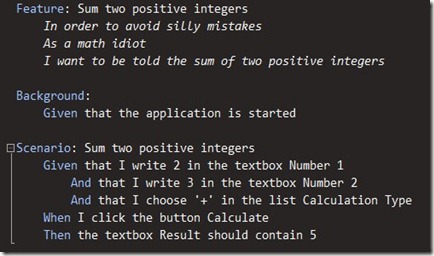 Please not that I pay homage to the SpecFlow-template :)

Also, on a more serious note, this is a very imperative (vs. declarative) style of writing scenarios. That fit’s our needs very well but maybe not yours…

As the BDD cycle says I could now compile and run my tests to get a Inconclusive result and some help on how to continue. The code I was suggested is in C# but that’s easily translated with this tool. Not to bothered with that. Yet.

So the first version of my steps matched this precisely. That could work for now. I could now start my outside-in development cycle and write some code.

When I now ran my tests they are all pending. Which gives me an opportunity to write some production code.

When you have created your module and got it to run and display an empty form, you’re ready to continue on.

The first thing I started out with was my background:

Background:
Given that the application is started

To achieve this I had to find a way to start the application via White.

I then used the BeforeFeature-attribute of SpecFlow to start the application (or attach me to it) and the AfterFeature to kill it. That made me write this code: 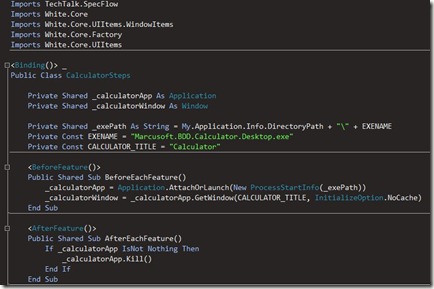 Now we’re cooking. This actually starts my application and displays the form. On to the next order of business…

The first row in my scenario says:

Given that I write 2 in the textbox Number 1

I need some way to get hold of a textbox and write the specified number in it.

First I cleaned up my step to match all those occurrences. Here is the Given-attribute and method declaration for that:

This will send the number after “that i write” as stringUserEntered and the name of the box after “textbox” as wllKnownNameOfTextbox.

With that in place I could remove the other two givens that was exact matches for specific number.

A problem occurred with the name of the textbox. When writing the specifications we don’t want to write the ID of the textbox (txtNumber1 for example). Instead we want some kind of well known name that the users refers to the box with. Often that will be the name of the label for the control.

In this simplified example I have implemented a convention (over configuration). All textboxes have the same name (in lowercase and without spaces) as their label. That may not hold for ever but works for now.

I could now write a method that returns a control, of a given type, based on the well-known name for that control. Here it is:

I ran my tests again to watch them fail since there was no control on the form called “number1”. Great – no I can write production code.

I updated the user control with a label and textbox called Number 1, and then ran my tests again and … progress! The correct number was filled in.

And the regular expression matches for both textboxes – so I when I get the next error (no textbox for named number2), i can safely add some production code and controls for that.

I had now worked my way outside, from the scenario / requirements, in to the actual implementation.

The final pieces comes together quite easy. I updated the Given-statement that SpecFlow-generated for Calculation Type from this:

And then implemented a generic method that selects a value from a combo box like follows:

That drove me to put the a Combo-box on the view. And got another part of my feature passing.

We’re getting there. One step at the time.

And the following method to check the content of a textbox:

With these two methods I could bring the whole feature together. And it fails and tells me that 5 is expected but it got an empty string. I can now implement the functionality for the feature.

This blog post is getting ridiculously long already so I better wrap it.

From now on I continued on driving my implementation from the scenarios. I took very small steps as described above, so I always knew where I was.

It took quite some time before I could get my first feature flying, but by then I had a real nice set of step’s that could be reused by the next feature. Which led to that the subsequent features were really fast to implement. I added scenarios for subtraction, division and multiplication. Which didn’t force me to write anything but production code!

What didn’t I do

I haven’t included anything on TDD in this post. And I didn’t do any. That doesn’t mean that I don’t think it’s needed, but I didn’t wanted to mix any of that into this example.

I will sure have to work more on the handling of names and references to them. There is an article on that in the White functional testing documentation, that talks about screen objects. Also I recommend watching this video on how to test the GUI in a web application. It gave me some valuable insights on how ATDD might influence your code and naming etc.

The code be downloaded here. I will sure work on it – so it might update from time to time.

This has been a very technical post with lots of code. But remember – it’s not in the tool!

For me the biggest take away when working like this is the way you can collaborate with customer, analysist and tester when writing your features and scenarios.

That’s so much more important than any tool.

If you read all of this – thank you. You have been an awesome audience ;)