There have been a lot of improvements and additions to dependency resolving in ASP.NET MVC 3. Even in areas that you first didn’t think about (dependency injection in views) at first.

OK – after my last post, in which I’m using Ninject (with the cool website) I got the questions if it can be done with Unity. Of course it does. This post shows how.

I’m using Ninject because of the super-slick integration with ASP.NET MVC 3 via NuGet. It gives my a “correct” and easy to start with solution. The main part in this found in this App_Start static file, that is run before any other code with the Web Activator mechanism: 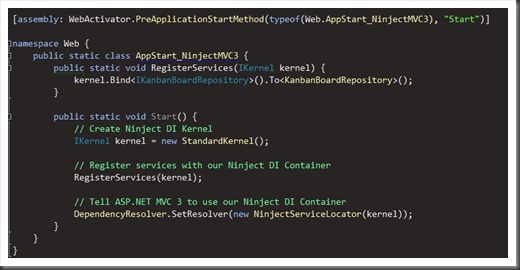 And converting that to Unity would be something like this: 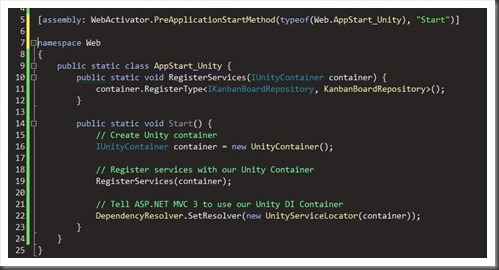 Yup – actually that’s all it’s too it. For a while there I was “worried” that I would have to implement a ServiceLocator (line 22 above). That’s not to hard since just the IDependencyResolver interface that is needed to be implemented (2 methods). But I just so happens that Unity implemented that for me already with the UnityServiceLocator.

Actually I can now easily switch between the two dependency injection frameworks (why you want to do that I don’t know, but it’s cool), by simply commenting out the Web Activator attribute at the top of the class:

So there you have it. Another area where ASP.NET MVC 3 is easier than you think.