From Wikipedia we learn that:

Twitter is an online social networking and microblogging service that enables its users to send and read text-based posts of up to 140 characters, informally known as “tweets.”

So you send short messages (tweets) that is picked up by anyone who follows you. You can follow a number of people to subscribe to their updates. Everything is public (almost see DM below) and can be viewed by anyone by going to your Twitter-page – that’s basically it.

But as with many simple things there are much more than meets the eyes.

What does X means?

Since the text messages only allow for 140 characters there are a few conventions and tricks that are used to communicate intent and more information in that short space. Here are few of them:

By writing a tag (#avegaConference for example) in your tweet other people can pick up what you have to say in a subject. Also you can easy follow the discussion going on for that tag. An example might clarify the use a bit:

Say that you are at a big conference with hundreds of other people. Of course you don’t follow all of them. That’s very impractical. But the conference might use a certain tag (#oredev, #javaZone2011 etc) and by including that tag in your message this can be picked up by other that search for that tag in all tweets.

You can find the most popular tags by searching for trending topics actually that’s a great way to keep up-to-date with important topics. The revolution in Egypt for example used #tahir (if I remember correctly) to collect all tweets about the event at Tahir Square.

When you mention a Twitter user you write the @-sign followed by the twitter name (aka Twitter handle) for that user; @marcusoftnet to mention me for example. Most Twitter client applications can inform you on all the times somebody has mentioned you.

As special case of mentioning is to write the user name first in your tweet. That means that you direct the message to that user. It’s visible to that person and all the persons following both you and the person you mention.

Everybody who follows me will see that tweet and know about Hugos lunch business. But if I instead write:

“@hugohaggmark do you want to tag along to Vapiano today? Again.”

Hugo will see this, but also the people who follow both me and Hugo.

Using this technique you can direct a message to anyone with a twitter account (@barackObama for example).

A retweet is simply repeating what somebody else has said. This is the reason that news and other information can travel very, very fast on Twitter .

You simple start your tweet with RT and then a copy of the tweet you are re-tweeting. Most client application has built-in functionality to do this for you.

For example, if @hakanforss tweets this noteworthy information:

Everybody that follows Håkan will see this. Including me, since I follow Håkan. So I can simply re-tweet that information to all the people who are following me, by tweeting:

With this simple mechanism we have now shared this information with hundreds of users, who in turn can retweet it. It’s an information sharing avalanche that cannot be stopped.

Smiles and other abbreviations are plentiful. I would stick to a few since not many are well known. Here are a few that I use:

If you reply to a tweet be sure to the Reply-function. Doing so give Twitter a chance to keep a nice thread going for you so that you can see the conversation in chronological order. Here is one example from the Twitter website: 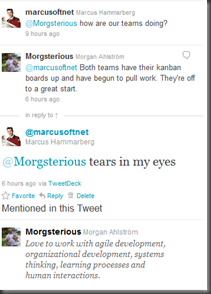 You can send private messages to someone you follow and who follows you. Start your tweet with “DM” and only you two will see the message. For example:

“DM @attefall Isn’t this one boring meeting? And it stinks from the person next to me :(”

That will not be picked up by anyone else. I would still use this function with care. It’s all too easy to forget the DM…. And if other people in the meeting, in my example follows you… You get the picture.

Integration with other social networks

Most other social networks can import your tweets. Mine show up on on LinkedIn for example.

I have also hooked up a nice service called SelectiveTweets that publish any tweets I do which include the tag “#fb” to Facebook.

There are numerous applications that can use the tweets you send (if you grant permissions of course) to do all kind of fun stuff.

More and more site allow you to sign in using your Twitter-account as well.

Finally my own opinions on how to use Twitter.

There you have my short introduction to Twitter and how to use it. Used right it can be a great source to news and information.

I hope you found useful. At least you Ulrica and friends