A session on Open source software at Microsoft

But is a lot of changes always good? What about ["feature complete" frameworks](https://github.com/marcusoftnet/SpecFlow.Assist.Dynamic/pulse)? Is it bad that no changes are happening? There's also other stats that you should consider: - The number of forks - people have copies of this code - The number of stars - people likes this code - The number of watchers  - people are interested in news in this code How many people are downloading it (on [NuGet](https://www.nuget.org/stats/packages/Nancy?groupby=Version) for example)? These stats tells me how much it's being used. But beware of the "operation"-aspect; now-a-days when a many people are restoring their packages from NuGet on build the numbers are WAY higher than the number of different people using it. Here's the stats from Nancy for example. 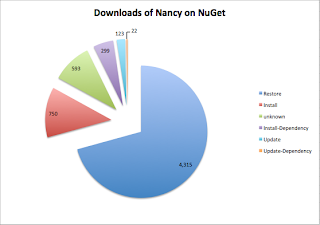 How is the documentation? Can I understand it? Is it well written? Is is **updated**? What about the "web presence"; can you find it via Google? Are people interested by it on [StackOverflow](http://stackoverflow.com/)? Is there a chat somewhere? Does the creator tweet or blog? #### Summing up this means that you have to decide for yourself. There isn't one single source of truth. Now... this resembles something that I know... what can it be ... AHA! The real world! It's just like that ### **How to contribute back** The final part of my presentation was about giving back to the frameworks you are using. I think this is vital to get a active and living community. Besides it ties nicely back to [the basic ideas and principles of open source](http://en.wikipedia.org/wiki/The_Cathedral_and_the_Bazaar#Guidelines_for_creating_good_open_source_software). In this section it was live demos all along. I talked about the ways that you can contribute back and was demonstrating live on the Nancy project as we went along. #### File bugs and issues One of the first and simplest thing you can do is to file issues, suggestions or bugs. On GitHub that's super simple with the issue creator. We created a [simple issue for a improvement](https://github.com/NancyFx/Nancy/issues/1196) of one of the error messages from Nancy. Filing issues is simple since it's just reporting what you found. If you're feeling adventerous you could also add a failing test that proves your point. That makes the maintainers of the framework go crazy of happiness. I have [done so a couple of times](https://github.com/markrendle/Simple.Data/issues/121) and that's been called "the best bug report I ever got" by [some people](https://github.com/markrendle). #### Documentation Write some documentation or update the existing documentation. Most OSS platforms (GitHub, Codeplex etc) have their documentation as a wiki so that anyone can update the documentation when they see the need. In many OSS frameworks the documentation is often out of date with the functionality of the framework. So just by **updating** the documentation you are doing them a big service. The "problem" with updating documentation is that you have to know what you are talking about, how the OSS framework works and should work and how to write about it. But this is your way into looking deeper in the functionality of the framework. I've learned a lot about [Simple.Data when writing docs](http://simplefx.org/simpledata/docs/pages/Test/Basics.htm) for them. At the session we updated the wiki-page on [Model binding for Nancy](https://github.com/NancyFx/Nancy/wiki/Model-binding/_history). Live on stage. #### Pull requests The final "level" in helping your favorite open source framework is to send them code and fixes. A lot of the things that I have sent in is [fixing failing tests](https://github.com/picklesdoc/pickles/pull/49) or get [rid of warnings](https://github.com/NancyFx/Nancy/pull/934). And that have taught me enough to actually being able to add new features and fixes. Be sure to look into the code standards they are using and follow the instructions on how to do [contribute to their repository](https://github.com/NancyFx/Nancy/blob/master/CONTRIBUTING.md). Don't feel sad if they send it back to you - this a great learning opportunity and, remember, that it's their code. In the session we did a [pull request live on stage](https://github.com/NancyFx/Nancy/pull/1197) to fix the issue we reported before. Thanks to the great Nancy crew we also got our changed merged into the master-code repository while we waited! Best demo I ever did! ### **Summary** As always I learned a great deal about the topic (OSS in this case) while preparing for this presentation and while executing it. For me OSS is now a vital and important part of my daily work. But that Microsoft is hosting an event on OSS is actually really cool. This is a changed approach from Microsoft and that change has happened fast - and continues to happen. Get on the .NET OSS train - it's a good one! PS. Dag König has made a couple of podcast on OSS and some frameworks (Nancy and Simple.Data for example): - <http://www.buzzfrog.se/index.php/2013/04/dev-cast-30-microsoft-and-open-source/> - <http://www.buzzfrog.se/index.php/2013/04/devcast-29-behvs-or-mappers-eller-rcker-det-med-simpledata/> - <http://www.buzzfrog.se/index.php/2013/02/devcast-22-ramverket-nancy/> ** **