Setting up a complete Node development machine. From scratch. For free 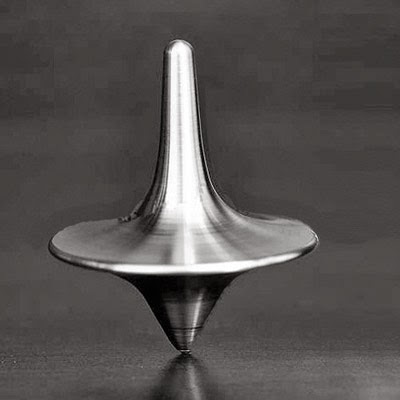 | | From ForeverGeek | If you're new to this VirtualBox is free a virtualization software, from Oracle of all places. Meaning that we can create a single file (aka an image) that represents an entire computer. With this you can run another computer in your computer. It's a bit Inception-like but useful. Your physical computer, aka the host environment, is where you will run VirtualBox. So you need to download the correct version for your host. Windows, Mac what have you. Also way down at end of the downloads page there's a link to a set of prebuilt images. Virtual computers that you can download. I had some problems to get that to work. And downloading them on my **slow** network took forever.   #### Ubuntu install media

Let's download Ubuntu installation media. We want the desktop version (although the server version would probably do just fine too). There's some helpful advice on the Ubuntu download page too, as seen on the right. WATCHOUT! The version of VirtualBox that I have downloaded (just a few weeks ago) only supported 32 bit Ubuntu. I got that in other words. Get the one that is suitable for you.   Once you click the Download button you will be taken to a "pay what it's worth page". I strongly recommend that you pay a couple of bucks. An operating system. For $10. Check the latests quotation for a Windows 8.1 license. You getting something very similar. But it's up to you. If you don't want to pay there's a "Not now. Take me to the download"-link. Ubuntu is a free "distribution" of Linux. For us non-Linux people this means that a company has taken the Linux core source code (it's open source remember) and created a version of their own. And is now giving it away for free. Ubuntu earns their money on consultancy and selling support I would suspect. Amazingly true. Ubuntu is Swahili, btw, and [means...](http://askubuntu.com/questions/424/what-does-ubuntu-mean) Nice, huh? Ok, that has not finished downloading yet. But will pretend it has. ### Create your virtual computer This is simple... if you know how. 1. Install VirtualBox ("Next, Next, Next, Wait, Finish") 2. Create a new virtual machine and attach the Ubuntu installation media 3. Boot up and complete the Ubuntu installation #### Install VirtualBox on your host Now that you have everything downloaded, first install VirtualBox on your host system. This is your typical "Next, Next, Next, Wait, Finish"-installation and I will not say much about that. Just doubleclick the "VirtualBox-yada-yada-yada-Win.exe" file you downloaded and you should be fine. #### Create your virtual machine 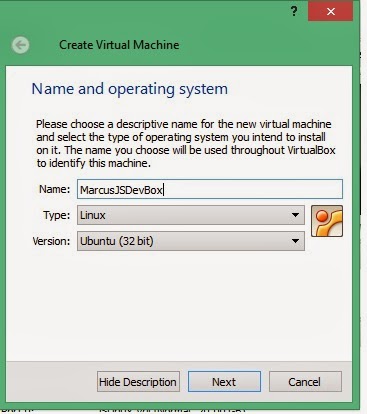 Now, again if you're new to this it will be a bit strange. We will now create a virtual computer machine. Or virtual machine for short and if you under 85 years old, and stopped use that phrase. Luckily this is a breeze in VirtualBox. 1. Start VirtualBox 2. Click New 3. Give your machine a name 4. Set the Operating system type and version 5. Click Next 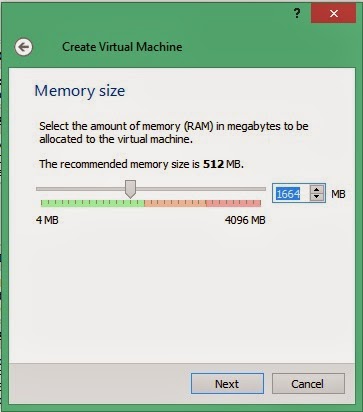 That was pretty easy. Now we will allocate memory. Here you will have to think about that your host operating system needs some memory to work properly. VirtualBox has indicated what they think is max memory to allocate to the virtual computer. I usually go below that just to make sure. Here I have allocated 1664 out of my 4096 Mb to the virtual image. Works fine for the things I will be doing. Now we will create the virtual hard drive. This was the thing that confused me the most when I first started to use virtual machine, quite a few years back. But when you think about it, its's natural; your virtual machine needs a hard drive. It's a file stored on your host system. We are now going to create it. I will not show every screen here, most of them are super easy to grasp; - Select "Create new hard drive" and click Create - For your Virtual drive type select Virtual Disk Image (VDI) if you have no special reason not to - Click Next - Select "Dynamically allocated" as storage on physical drive. The slowness they are warning you about has never bothered me. Or I have not noticed it at least. - For file location you need to make sure that you know where the file ends up. Default it is under your user-folder on your host system. I usually put my virtual disk drives on a separate disk. Click the little browse symbol and choose a location - For size... well I went with 20 Gb. It will increase as needed. - Click Create. - And when you have done that your computer is done... This is where I got confused, but the virtual machine you have now is actually completed. You can compare this with buying a blank, uninstalled computer from a store. Nothing is installed on it right now. Let's fix that. ### Installing Ubuntu on your virtual machine 1. Attach the .ISO with Ubuntu 2. Start the Virtual Machine and follow the installation instruction to install Ubuntu 3. Done - Ubuntu is installed 4. Oh yeah, install the VirtualBox Guest Additions as well. If you got home with an empty computer, what would you do? Install an OS. From a DVD probably. Let's do that, but from the .iso-file we downloaded from Ubuntu. 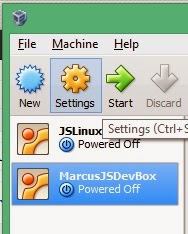 The first thing you would do is to insert the DVD with the OS in the DVD slot of your new physical computer. Well you don't have neither a DVD nor a DVD player. We'll have to figure something else out. Select your virtual machine in the VirtualBox (quite ugly, old school GUI) and select Settings. This will open a scary dialog box where you can tweak all sorts of settings for your virtual machine. Don't! If you're not absolutely sure that ~~that's what that blogpost, on performance you read, said what you should do~~ you know what your are doing. Things can stop working from here.

Instead head over to the Storage-section and click that strange little +-sign. This let's you choose a "disk". Choose the .ISO-file you downloaded from Ubuntu and click ok. This is called mounting a ISO, and is the equivalent of putting a physical DVD in the DVD drive of the computer. You are now ready to fire your computer up for the first time. This is done by selecting your virtual machine and clicking Start (big green arrow). When you do that it will install Ubuntu from the ISO-file. There's not much use for me to repeat that process. It's smooth and requires you to follow the on-screen instructions. Takes about 15 mins to install. Here are the comments and caveats that got me wondering.   - The first thing that happened was that I got a big red screen saying "Uninitialized yada yada yada... upgrade BIOS yada yada yada...". That went away by itself - The first choice is if you want to "try" or "install" Ubuntu. A bit strange maybe but you of course should go with Install there. - Check "Downloading updates during install" - You want to erase the disk, since theres nothing on it and install Ubuntu on it - And the fill in the personal things. IMHO a strong password is not needed here since it will be run on your strong password protected computer... But you do as you want - As normal these days theres some commercials and instructions on how to use the OS during the install. Quite handy stuff if you are a newbie. Like I was at that point. - Did you notice how Ubuntu keeps working while you where typing in thing and indicating your timezone and keyboard etc. Nice! - Doing a lot of other things while installing is stupid. Like writing a blog post... The host is quite slow while installing. Or you might have to adjust the memory settings for your virtual machine. I backed it off to 1.2 Gb instead for faster handling on my host. When Ubuntu is installed it will ask you to reboot and then you can log in again. In all honesty VirtualBox crashed on me here... Twice... I reinstalled but the same thing happened. But unmounting and starting the virtual machine worked just fine... Strange and a bit uneasy feeling.   You can now "unmount" the .ISO file if you like, you don't need it anymore. When the virtual machine is not running go to

settings/storage like before, but remove the ISO file this time. You can also click the little disc at the bottom of the screen when you virtual machine is running and chose "Remove disk from virtual drive". #### VirtualBox guest additions Oh, one last thing. We should install the VirtualBox guest additions. What's that you ask (and me too from time to time)? Well: > They consist of device drivers and system applications that optimize > the guest operating system for better performance and usability You install them by: 1. Start the virtual machine 2. Click the Devices menu in the VirtualBox window that your virtual machine is running in 3. This will mount a .iso with the guest additions and start installing it 4. You will have to give your password to give the installation permission to run 5. Don't be scared of the terminal window flashing by... It's the Linux way. "Press Return" when it's completed. 6. Soon it will be done and you're wise to restart the computer again. 7. Done ### Setting up VirtualBox There's a few settings that I find useful and always to in VirtualBox. First I make sure that I know which the Host-key is. This key is used to invoke commands from your host environment. For example making the virtual machine window fullscreen (Host+F). And now that it's fullscreen go back again (Host+F again).

So... which is my host key then? That's actually pretty hard to find out: 1. Open VirtualBox 2. Got to File - Properties 3. Select Input 4. Select Virtual Machine 5. In the top you'll find the Host Key Combination... For me it's the right CTRL-button. I seldom use that button for other things. 6. Easy huh? NOT!

Luckily I found a much easier place to see the host key. The currently selected host key is displayed in the lower right corner of the virtual machine window. Here's that part of my screen that shows the "Right Ctrl"-key as the host key. Click it to change. I also make sure the that the clipboard is "bi-directional". That means that I can copy something in the virtual machine and then paste it in a program on my host. Or vice versa. Very handy. 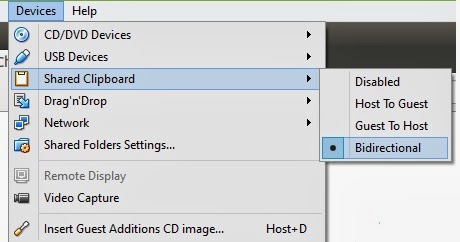 ### Get to know Linux / Ubuntu Skip this if you're not afraid of new OS's. If you are. Don't be that. Read this instead. If you've used Windows XP/7 or 8 or OS X during the 2000-ies you will be able to figure all of this out yourself. Here's my homescreen: