This week started a bit late due to a public holiday, the Hindu new years celebrations, (the joys of working in a country that respect 4 different religions and celebrate all the main events publicly!) and then we had been spread out during the weekend. It took some time to gather the forces.

Last week we were a bit confused about the lead times and throughput. Sure enough this week we did some more items, due to the ketchup-effect of doing to big items. We are continuing to track both the lead time per size (S, M and L) and the number of items (or each size) that we are completing per week. It’s still a little too little data to draw any conclusions but we are confident that with this data tracked we will soon start to understand our work.

Today I told the team that the little sessions where we stop and think how we can improve are called retrospective. They all went: OK, who cares? which was exactly what I suspected and wanted. The name and format really doesn’t matter. That you do stop up and reflect on how you can improve regularly does matter!

The retrospective today, 2 days delayed due to Hindu public holiday and not all people being office, was particular interesting. We rather have everyone there than do it on a certain date. But we hold a improvement meeting every week.

This weekend we had a meeting we all the leaders of our customers, the directors of the hospitals. From that meeting came a flood of small tasks that we needed to address; write PMs, check on status for projects, help people start using tools etc. etc. So we saw a need to do something about our board structure.

Right now we only had three columns: Todo, Doing and Done. Particulary the Todo-column bother us, since it contained a lot of stuff on very different time scale. Something was a 2 months project that we need to do before 2015. Another thing was to send a couple of emails to check the status of a project somewhere. After some discussion we decided to do something that looked like this: 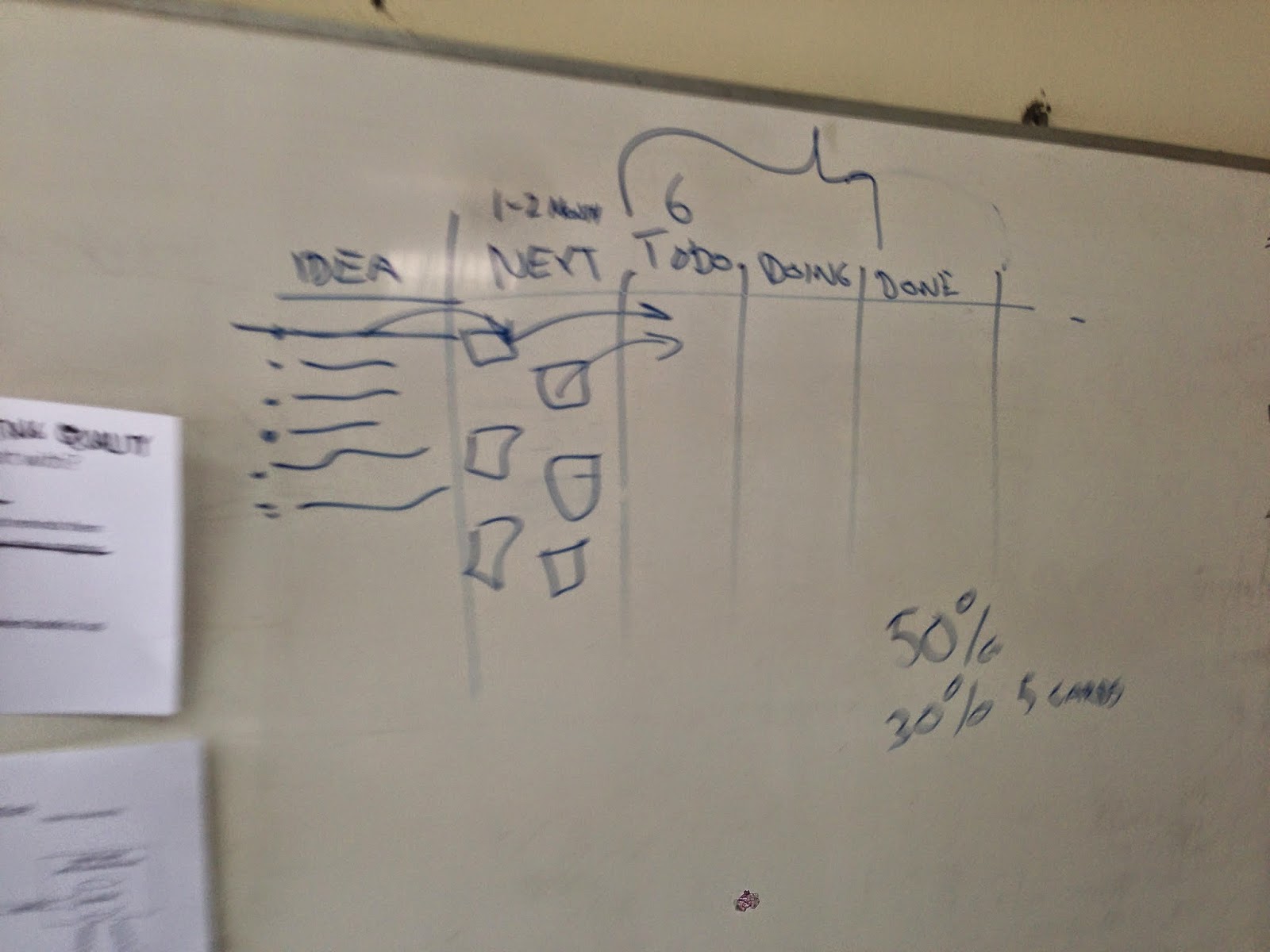 Here's what we decided to do:
- We kept the Doing and Done columns (although I showed you what we did with the Done-column later) - The Todo column have a limit of max 6 items, we later changed that to 8. - We changed the name of "To do this week", meaning that this is imminent items that we have decided to do as soon as we're done doing the things in Doing. - The Todo column has a prioritised order from top to bottom. - When we put something in Todo we also set S, M or L on the item if it's not already classified. And note the date when it was put into the Todo-column.   - We added a "Next" column before that. To better understand it we called it "Next month", meaning that this column contains stuff that is worthy our attention but not now. Usually this means work that we will start within a month. We write the items in the "Next month"-column on cards but there's no other requirements for them. There's no order either. Just a bunch of stuff. - Finally we added an Ideas-column where we could note down ideas. These can big project or small tasks. There's no order, just a couple rows of text. No cards even. We then created three piles of cards and moved everything on the board to the correct pile. This is what it looked like, at one stage, during our little exercise: 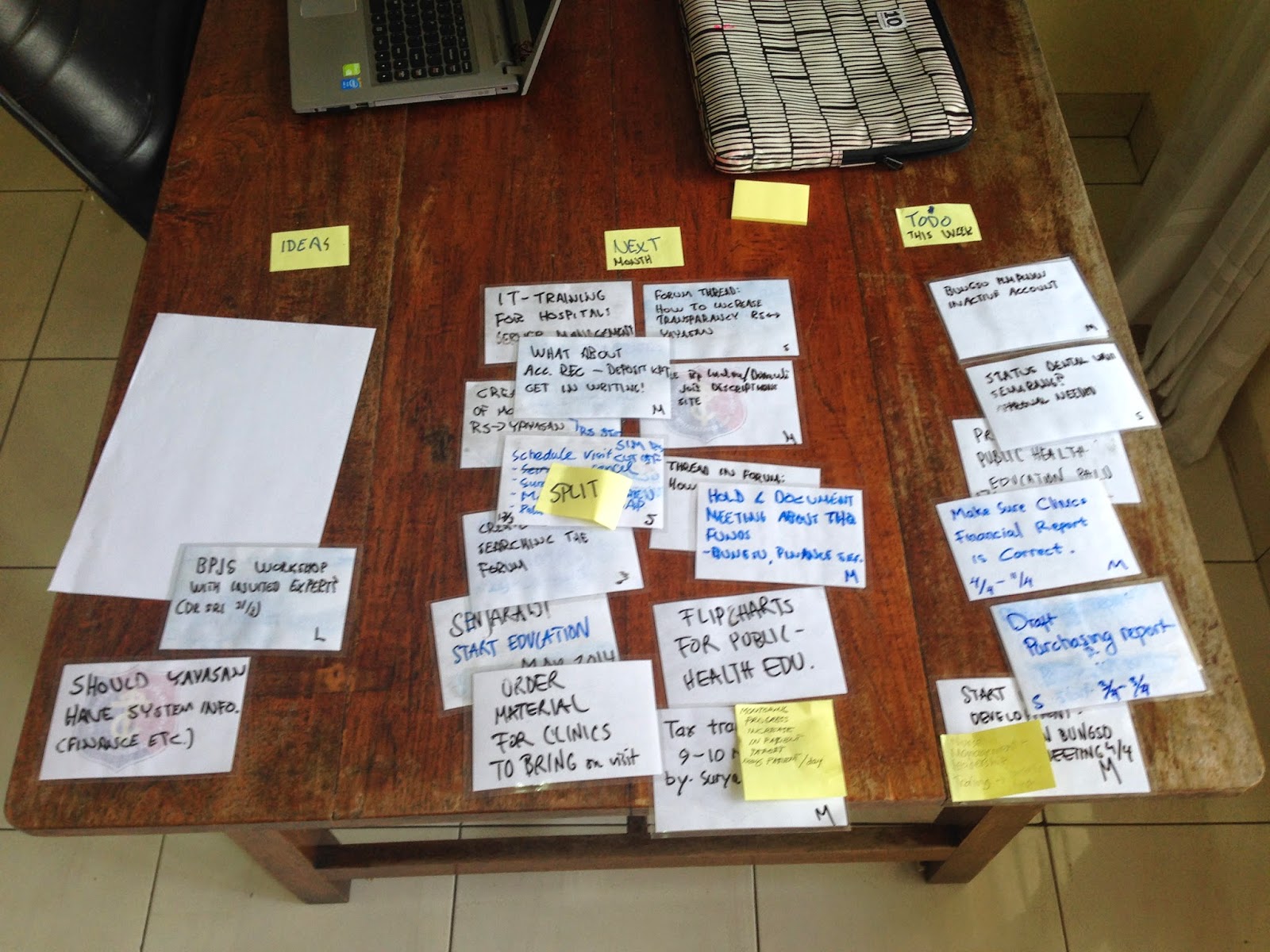 Elin took the responsibility to put all of this back on the board, producing "much nicer signs over each column" too. My writing was not satisfactory I'm willing to agree on. Here's how the reorganised board looked like: 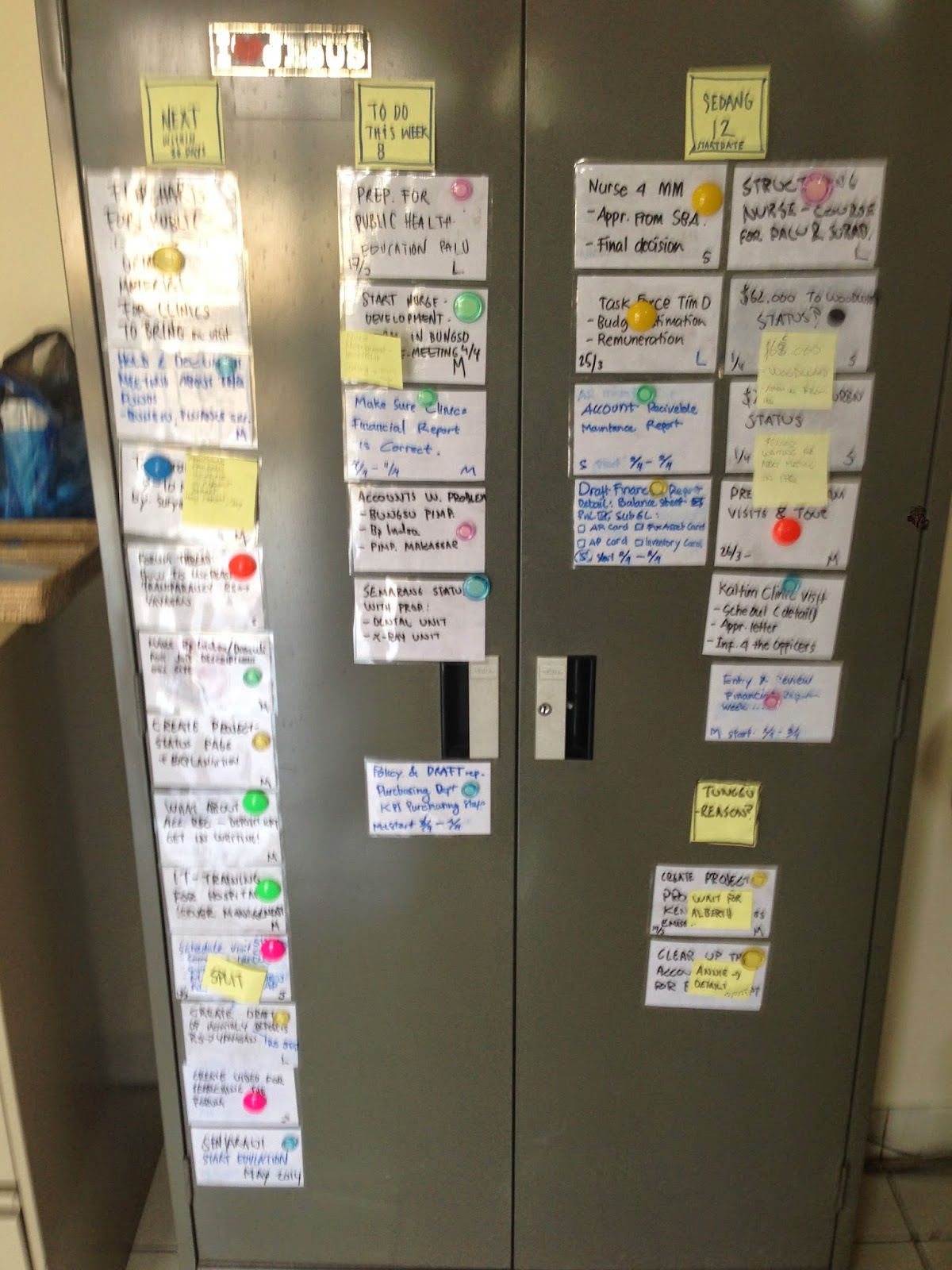 ### The move from Idea to Next, and from Next to Todo One could wonder how we decide on what to move into the "Next month"-column from the "Ideas"-list. Or from the "Next month"-column to Todo. Here, this makes me very proud, we're trying an experiment combining ideas from David Marquet and Aptitud (my Swedish employer). Here's what we decided to do, if you're out of work: See if there's anything that you can help to finish in Doing. If so - do it! If not, see if there's anything worth starting from Todo. If so - do it! If you still don't have anything to do - check the "Next month"-column for something that looks interesting - Get at least one other person to the board and explain what you are planning to do. - Start by saying something like "I intend to do ... because I think that would help our clinics and hospitals by ..." Still out of work - check the Ideas column and repeat the process for the Next column above. This is often "bigger" work items so maybe you should involve a couple of more people in the decision. Still out of work? Do something that's fun and that you think will help us I love that "I intend to" - part ripped from David Marquet's excellent book Turn the ship around and could probably write a couple of post on that alone. But i will not. The part on involving more people in your decision the bigger it gets is something we have used at Aptitud. Works great there! Buying a new computer - ask a colleague and describe your reasons to her. Hiring a new colleague, involve a few more people in the decision. ### The Done-column

The "Done"/"Selesai" column is now reduced to reporting only and has been move off the board (aka the cupboard) altogether. We created a very simple reporting sheet where we just note down the size of each item as well as the start and stop date. This will make it simple to produce our diagrams as shown last week. Since we have a limited amount of cards we moved them back to the starting point pretty fast anyway so there was no real use of having a column of "done" stuff. ### Conclusion All in all this was a very refreshing exercise. As I said in the beginning the important thing is that we always are **trying to improve**, experimenting with different things. This week it was like this.