...and then it moved - the greatest feeling in the world!

Have you ever try to lift a piano?

If you have I bet you have the same experience as me; you go up to the piano and take a good hold and … nothing. It’s like it’s bolted to the floor, or something (oddly enough my exact words the first time I tried to lift a piano).

This is impossible. We will never make it. But you get one more guy and then you make another try. Maybe if someone could just slid a mat underneath … And you try again. 1…2…3… and … IT MOVED!

That split second is my favorite feeling in the whole world. Trying really hard, and get the first little sign of that your efforts are in the right direction. When IT MOVED! It of course doesn’t only applies to pianos or not even physical effort but that so tangible there. Let me share something that has not to do with physical work, but where this feeling was super strong. It happened today.

The main problem is the lack of customers. Fewer and fewer people visit the company meaning that they loose money every day.

We went there about two weeks ago. We employed a few well directed actions to try to turn the numbers into where we actually made money instead.

We showed everyone on a big board and showed it everyday.

We followed up our actions daily. We asked them to only tell us what can be achieved until tomorrow instead of aiming for the stars. Our kanban board only have one column, for aficionados; “Tomorrow”. Here we list the things that will be done tomorrow.

We made motivational speech (my first ever!) since the staff was totally depressed after being told for years that they suck and the numbers looks bad.

We also started a company-wide focus on quality in everything we do. Years of being “sub-standard” has left these poor guys without any feeling for taking care of equipment or each other. Even the simplest fixes are very hard to get done. Just because … really don’t know. But I think it’s because they are not used to do stuff. Especially not stuff that no one told them explicitly to do.

Also here we asked them to do only small, small things. “What have you improved since yesterday” will be asked to each department. I’ll write another blogpost about the outcome of that. Too early yet. 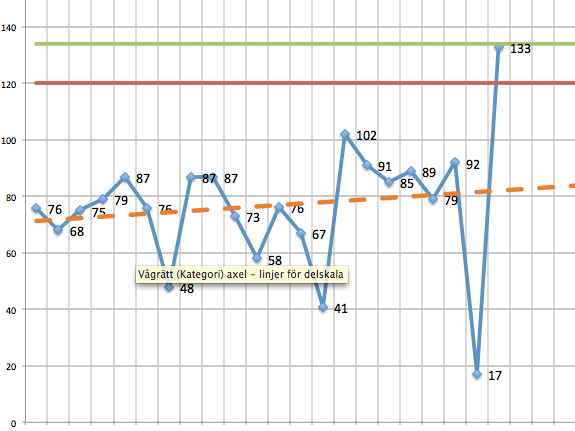 For the first time ever we broke the "not losing money"-line (red line on this diagram). And in the process almost beat the "and then some profit too"-line, at 134 customers per day. The feeling was utter shock from everyone... so we didn't really celebrate it as we should have. But we'll do that tomorrow with cake to everyone. And a big long round of applauds. And lots of cheering. IT MOVED! We have done something to make it better. We're moving in the right direction.

And something else happened today. This, to me, is one of the most important photos I've ever taken. Behind this door is a part of the building that is under renovation. No one should go up there if you're not a construction worker. See those stones at the bottom? They are the key to this photos. This door has been flapping open for weeks. Months even. Nobody cared. Today, without someone telling them to do so, someone (I have no idea who) put that stone there. To keep it from flapping up.
Someone thought about having a door flapping up in the face of our customers and ... here it comes ... **did something to improve the situation**.
That didn't happen a few weeks back.
IT MOVED!
**UPDATE:**
Today (21/10) something amazing happened. We have a very crowded room situation which affects the way we can do business. One of our staff (without any formal authority) saw this problem and the day after at our morning meeting said this: > I saw that it was very crowded for us in this room. This is hindering > us to work effective and slows down for our customers. But we came up > with an idea for how to improve this. {Long explanation about how to > move 3 or 4 people around in order make this work}. > ... that's what we think will make this better. I wanted to try this > out today. Is that ok?  IT MOVED at little bit more. ### Objection, your honor "Hrmf, Marcus, you're still loosing money most days!" "Yeah... and those stones... really? What kind of crap solution is that? How about locking the door properly?" No, you didn't hear me. We are not out of harms way. We have a **long** way to go. Things can still end horrible wrong and bad. But that doesn't matter much. Because IT MOVED! We now know that we can do this. Getting IT to move is the hardest part. Once that's done we just keep pushing. We know that now. And that, makes us feel great!