I’ve just started to use Jekyll as my blogging engine. It’s mostly nice but I’m getting used to a new tool. And maybe actually the lack of tools since it’s just markdown and git.

One of the things that I found early to be a stumbling block was to create a new post. Since I’m still fresh to the structure of the YAML front-matter I found myself copying and pasting. Missing and missunderstanding.

So I looked for a post generator and found this gist that is used, at the command line, to scaffold up the structure of a new blog post.

Let me show you how I tweaked it and a problem that I ran into, being a newbie.

I’m very much a newbie in bash script files so bare with me and please enlighten me if this can be better.

First of all I changed the constants at the top to my settings:

Jekyll has something called categories and something called tags. I cannot really tell them apart but I’m using tags on my blog. So I went through the script and replaced “category(ies)” with “tag(s)”.

Tags goes in the front matter and should be listed one tag per line, each line starting with a dash (“-“). This caused me some problems and I had to do some hair pulling and scratching of cheek to get it to work.

Here’s the gist (pun intended) of it

When I first used the script I was a bit surprised, because I thought that you just executed the script at the prompt. Apparently you have to send it to the bash command. Like this:
bash scaffold_post "A post title" 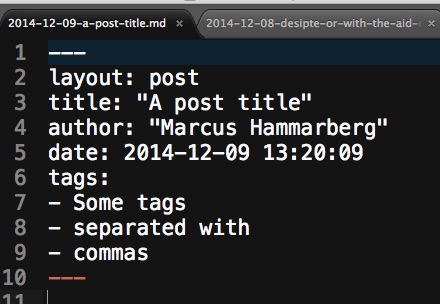 Once that you execute the script it will ask you for tags. Separate them with a comma as you remember and a nice post will be scaffolded for you. It will even open in Sublime (or what ever editor you have configured) and look something like this.

Thank you Daara Shaw for that great gist. Helped me lot!