Things I say often: Why?

Really … this is probably the word I use most often. And I’m proud of it!

It’s not only because I’m ignorant and forget things a lot, but to me this is where knowledge is started to be created. I’m guessing I could write an entire book on just this single word, so this post will just be a few thoughts of the top of my head.

Once you think about it, Why might be the most powerful word there is. Every overthrown dictatorship in the world has started with someone asking: Why? “Why can he alone decide in this country?”, “Why should we pay taxes to Prince John?” or “Why should women have to wear clothes that cover them and not being treated like equals?”. And then they acted to move closer to their vision.

I’m a firm believer that if something is good it’s also withstands or improves by being criticized. If not… well maybe it wasn’t good enough. Or, even worse, someone is holding it back from improvements: “Please don’t question the process”, as I’ve been told a number of times.

Compare this approach (which is just in your mind and for anyone to decide):

Please question the process. It's so good that it can withstand some criticizing and we welcome the improvements that we can find by questioning it.

And just for the record: I’m Christian. I think Jesus and my Christian faith can be criticized too. It’s so strong that it holds for me asking Why. That’s really what Jesus did with the current ways, religions and leaders during his work. It’s in the Bible :) I’d be very scared of being involved in a religion that didn’t allowed me to ask Why or question it.

When I think about the word Why a very particular memory comes to mind. My father told my long ago about a movie he saw. He didn’t remember it’s name but I’m sure it’s The Snake Pit (1948). The movie is famous for criticizing the ways of mental health care in the US at the time.

The movie is about a woman (Virginia Cunningham played by Olivia de Havilland) that is imprisoned in a mental hospital, against her will and despite the fact that she’s not sick. The treatments and processes however, leads her to believe that she is. Soon she ends up in the ward for the apathetic. In that room the hospital staff have the patients just walk around the room in circles. There’s only one rule: You cannot be in the center of the room. 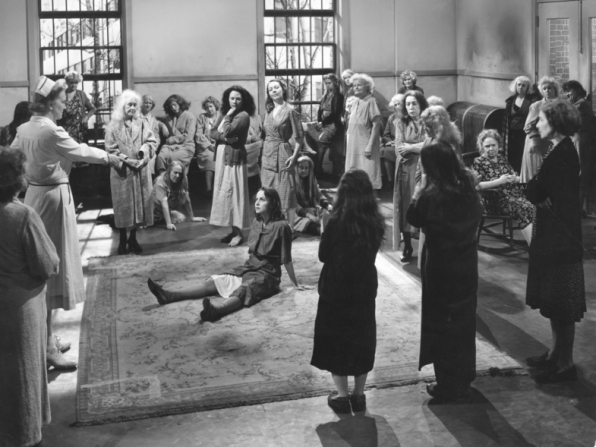 One day… (set to the beautiful 2nd movement of Dworáks No 9, New World Symphony) she stops. And ask herself: Why? She goes into the center of the room and sits down. Why - is it not allowed? A nurse spots her and realize that if you’re healthy enough to question arbitrary and incomprehensive rules like that … you’re probably not sick at all.

Are you asking Why?
Are you looking for better?
Or do you go with the flow?