Why I built page-logger... and how it made me money
I wrote a little application called page-logger for purely selfish and lazy reasons. It was fast, quite fun, I learned a lot and apparently I could make MONEY by using it. Which I didn’t thought of when I wrote it. In this post I’ll take you through some code, point to some things that I learned and finally some thoughts about learning from your data. I hope you like it.
Javascript, Node, Koa, Agile, Lean

I wrote a little application called page-logger for purely selfish and lazy reasons. It was fast, quite fun, I learned a lot and apparently I could make MONEY by using it. Which I didn’t thought of when I wrote it.

In this post I’ll take you through some code, point to some things that I learned and finally some thoughts about learning from your data. I hope you like it.

I’ve been using Blogger for a very long time. From when I started to blog (2006… oh my) until early last year… OMG - I’ve been doing this for 9 years.

Oh, sorry… got lost in sentimentality there. Ok - last year I switched to Jekyll hosted on GitHub. That’s worked out very well.

However - there’s a nice feature of Blogger that I was missing. There’s a lightweight Google Analytics built into Blogger. It’s great for tracking how individual posts was received (read: did anyone read that?).

Yes, yes … I’m sure that can be read out of Google Analytics too, but; firstly I don’t know how, secondly I’m a coder and I wanted to build something. Hence: I tried to build it myself.

How I built page-logger - and what I learned

My platform of choice (for now) is NodeJs using the execellent Koa framework.

Basically the application fell out in two simple parts;

The site is very simple and traditional, so not of much interest (he said hoping that the rest would be interesting…), although I had great fun learning about chart.js - a great tool. Here I one example on how I use it

The API part is more interesting, and was exceedingly simple… or so it seemed. Here’s the meat of the implementation, all of the code can be found here

Yeah, there’s a small app.js as well that sets up a route for POST to “/api/pageview”, but that is outside the interest of this post. See the code

Now I ran into two problems; firstly I’m posting page-views from my blog at www.marcusoft.net to the domain of the page-logger application page-logger.herokuapp.com. That’s not ok if I remember correctly.

Secondly anyone can post to this endpoint and I will swallow it, potentially flooding my database.

CORS is a way to fix that. And with the amazing plethora of middlewares for Koa this was supersimple to implement. Koa-Cors is the telling name of the middleware I used;

As you can see, on line 7, in it’s simplest form CORS is just one line, telling our application to use it (app.use()). Now, what does that mean?

It simply checking the presence of a header called “Origin” that reflects all where the HTTP-request came from, and setting a “Access-Control-Allow-Origin” CORS header that is returned to the client. This is like the handshake of CORS.

Now, in my client, I had to set the Origin-header… I thought. But it turns out that header is set automatically by modern browsers as you do Cross-domain requests.

This means that the client really can be just this simple JQuery:

Here I’m constructing all my required parameters from a the current document meaning that this function is easy to kick-off at the end of the page, once it’s loaded. I could even put it into a .js-file that on the page-logger-site and just reference that from my blog. If I wanted to.

I needed one more part to limit the access to my application and that was to only allow the applications / sites that I had given access. I did this as simple as possible by just storing the name of the sites I allow as configuration parameters.

When a page-view is process I make a very simple validation against the sites I’ve listed in my configuration object (config.clients), that is just an array of parsed configuration string.

And that takes care of this, in a very simple, straight-forward way. It most certainly can be more secure, but it works for me.

What I gained by building page-logger

Ok, so I built a simple tool, that already exists, coding something that could be more secure, spending time creating it… I heard you all in one voice:

Well, first and foremost I did it to learn. And I learned a lot. GOAL #1 - Accomplished!

I went through the report for the best pages this month (see, easy URL access, public for all… #transparency for the win!) and found my top 5 posts.

I don’t really like ads, especially not on a blog, but I thought I’d make a little experiment. First I added an AdSense ad at the bottom of the #1 blog post on the blog.

This is very unobtrusive ad-placement and only on the places where it actually mattered - the #1 blog post. I ran that for one week. Then I took the next step of my experiment:

I extended that to the top 5 posts. Still very few posts overall and not on the first page of the blog. 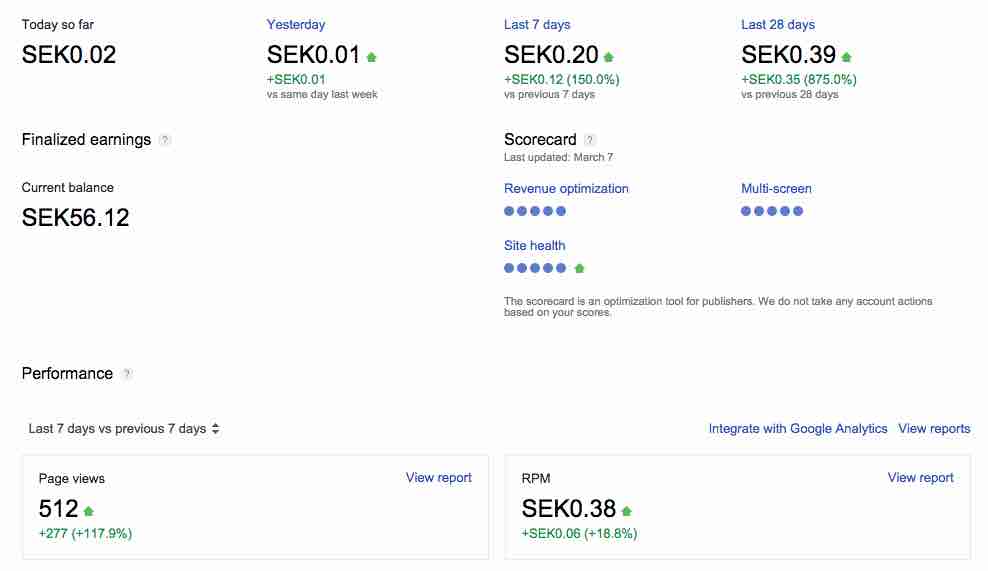 Yeah, it’s ridiculously little money, but the improvement keeps climbing. But see at the improvements. I could do that with very little effort by listening to the data and change based on it.

I found that fascinating.

All in all this was a fun little side project that thought me a lot. Just like I like them. I hope you found this useful and can build something better with the things you learned here.

Please tell me if you do.