How trust, kanban and a little structure changed a life today
I’ve seen many people change into something better over my years as a consultant. It’s beautiful thing - but I’ve never experienced something like that I witnessed today. I was a small, small part of that change and I wanted to share the story with you. It’s a powerful testament to what capabilities lives in each human being that can be released if given the right circumstance and rooms.
Kanban, Agile, Leadership, Indonesia, Life of a consultant

I’ve seen many people change into something better over my years as a consultant. It’s beautiful thing - but I’ve never experienced something like that I witnessed today.

I was a small, small part of that change and I wanted to share the story with you. It’s a powerful testament to what capabilities lives in each human being that can be released if given the right circumstance and rooms. 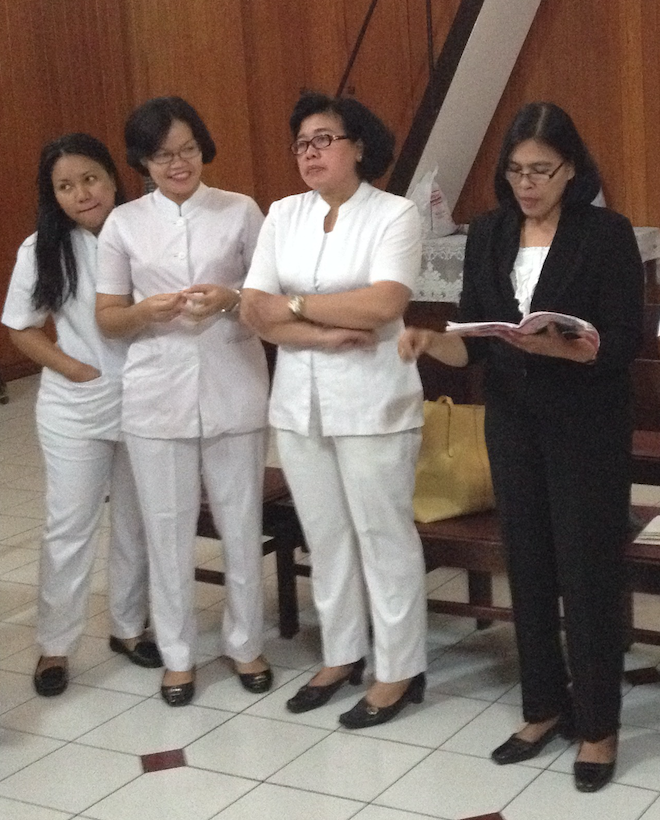 This is Ibu Elsye (lady dress in black in the picture) or Mrs. Elsye for you westerners.

She’s General Manager of a hospital, Rumah Sakit Bungsu, that I’m helping, here in Indonesia. General Manager; what is that, in a hospital - is a very natural question to ask. Basically she’s in charge of everything that is not health care. Food, laundry, maintenance, security staff, drivers … you name it.

If you need something fixed - go to Ibu Elsye.

She asked our help (that is important, folks) about two weeks ago. She said that her departments was overworked but still never got anything done. This had to do with priorities being changed often and also many people bypassed Ibu Elsye and went straight to the people beneath her.

She spent her days just running around trying to get things done, which “I don’t want to do anymore because the moment I go into a room I get more to do”. She was sobbing during that sentence. Me too.

Ibu Elsye was stressed out to say the least. I’m talking “having problems sitting still on the chair”-level. Given her situation - I fully understand.

Me and my colleague Dinauli decided to try to help her. Our plan was very simply; let Ibu Elsye take control of the tasks and her schedule for her days.

Step one: Move authority to the information

The management team have a morning meeting around a board every morning. It contains the things that we are working on right now.

To resolve the situation I, in my role of helping the management team of the hospital, made one of my very few direct decisions. I said:

From now on - we don't talk about maintenance and stuff like that in this meeting. We leave that with Ibu Elsye. We trust you to take care of that for us.

We decided that Ibu Elsye would report to us on weekly basis what they had accomplished and come back to us if she had any problems or questions.

This was really a blessing for the management team too. Because, at that time, we spent way too much (all?) time talking about details; like best type of flowers in the garden and colors of walls etc.

We could now, even though not everyone liked it, let go of all of those things and focus on the real problems, situation and opportunities in the hospital.

Step number two was give Ibu Elsye herself some structure over her days. My colleague, Dinauli, created a schedule for what needed to happen during the day.

We decided that she should have morning meetings with her staff; a short briefing on what is happening during the day. 10 minutes. She needed two meetings for that, since the security staff couldn’t leave their post. Focus was on What needs to happen today and Information sharing.

Then we allocated 1 hour for her to go around the hospital. We time boxed this to 1 hour; when the time is up you go back to your office and continue the day after if you didn’t get through the entire hospital.

There was other daily duties that was given time, but we also allocated time for slack / catch up time in her schedule. This is super important and made all the difference for her.

Maybe she couldn’t do her “rounds” in the morning. Well, now that was ok - there’s slack for that in the afternoon.

We decided that all work that needs to happen needs to go through Ibu Elise. In Indonesia this is easy; we just had the director of the hospital say this, in front of all the staff:

From now on anything you want to have fixed has to be written down and handed to Ibu Elsye. No going to the workers directly

We even created a special yellow slip that Ibu Elsye is carrying with her during her walks around the hospital, offering people to add things. She are then putting that on her list, making the prioritisation for the next day (or what have you) work.

I suggested to the workers and Ibu Elsye that they, in their morning meetings, always only work the top 3 prioritized tasks for the day. When they are finished they come to Ibu Elise for the next task.

There was a short look of disbelief when I said this, then a “Can I do that” and then:

Introducing #kanban made a person cry of relief today. Never had that before, but I guess 10 years of being swamped with work wears you down

Today it’s two weeks since we did these changes for Ibu Elises situation. Already after 1 day she came up to me and said that her days was so much calmer now. And the staff loved the focus and calmness of work that the changes has made.

But in the morning meeting this morning something amazing happened. We got the first (yes they forgot to do that weekly) report from Ibu Elise.

Normally they do 2-3 things in a week, so 6-8 would have been expected for an improvement. Maybe even 10.

Ibu Elsye reported 46 items. 46 things that they had completed in the last 2 weeks.

It was the best morning meeting I ever attended. People started to laugh in disbelief. There was cheering for each item (“YES - finally our AC got fixed!”). There was tears of joy. People was hugging each other out of… pride or just the general feeling of liberation and happiness. It took so long that I brought out a chair to sit on (as a joke).

Even the most sour of us were nodding in approval. Food for the celebration of such a great improvement was suggested - to mine and everyones happy approval.

But mostly, in the middle of it all - stood a new Ibu Elsye. With confidence, happiness and pride. This was really her doing, her time to shine. I could hear a new voice “And then my team did”, “We also finished” and “Remember the old lamp in the kitchen? … SUDAH! (fixed)”

Here’s a short video when she is going through point 22 - 26 of the things that her team had accomplished.

Very shortly - we unlocked the potential of Ibu Elsye. We gave her the room to be awesome. We showed that we trusted her and stated our trust and expectation (accountability) to her clearly.

I also think that structuring her schedule, limiting work in process and move the authority to the information played a big part - but there was an amazing person in there that just got out to be better than before. That was all her.

Who around me do I need to trust more? Give more room? Maybe it’s that person that I didn’t think had it in them? What do ME, myself, need to do for someone else to become more?

This day was amazing and I will never forget it

There’s been some more reports from Ibu Elsye and at every time she and her team has been doing great.

Today she did a report again and she was a little reluctant to start with.

Well... I've lost one of my two workers to driving and also we have cut the budgets for improvements, so we have not done as much as before

She started. And then went on reporting 38 items more fixed the last 2 weeks.

Think that over; she lost 50% of her staff and had less budget to make the improvements. Still her team did 38 items of improvement.

First it’s a testament of the effectiveness (and efficiency) of her team now. Secondly there’s innovation going on there too. They didn’t do the things they wanted, or in the way the wanted, so they did something else instead.

Thirdly, and most important, when I asked her about her work situation she said:

This day was amazing too, and I don’t think I’ll forget that either.