Backlog and features
A couple of weeks ago I tweeted: I'm not far from saying; if your #backlog contains features you've already failed. #impactmapping #userstorymapping #agile #lean— Marcus Hammarberg (@marcusoftnet) June 2, 2016 In this post I will explain what I meant. And also give a suggestion on how to do something better. I know it’s better - I’ve tested it many times. Just this last hour to be exact :)
Agile, Lean, Life of a consultant, Kanban

A couple of weeks ago I tweeted:

In this post I will explain what I meant. And also give a suggestion on how to do something better. I know it’s better - I’ve tested it many times. Just this last hour to be exact :)

I’ve seen problems with backlogs that contains a (long) list of features. It often manifests itself as priorities being changed, team being precieved as non-transparent and sometimes the team feel like they are not included in what is being built.

is one thing I’ve heard my team member say. And

Why did you build that now?

is a question that ends up being very hard to answer.

What to do instead, mr Wiseguy?

The solution is very simple - draw your backlog as a mind map instead of keeping a list of features. Preferably as an impact map.

Starting from WHY we are doing things and then linking the things we are doing with that WHY-statement is really powerful in itself.

Secondly - a picture says more than a thousand words and is so much nicer to talk about than a list of features. Here’s an example mind map without too much revealing information: 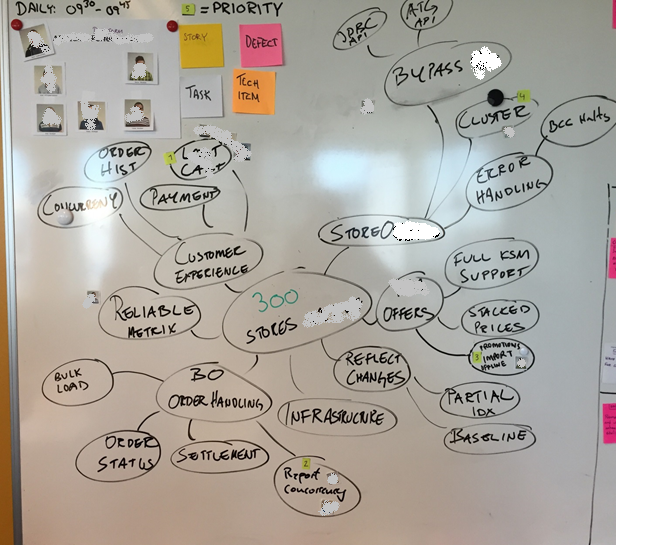 Let’s pick this backlog on some information:

What has this helped you with?

Well, first of all communication. It’s SO much easier to talk about this map and the ordering here than a list of features. Also the connection to the WHY in the middle is very good to discuss if that’s the correct why and also for the things that the team does - if that is the correct thing to do now to support the WHY.

It basically answers the Why are you doing this now? question by merely being there.

Secondly this impact map have saved us time and effort already. See the big empty space above Store O, to the left? That’s one of the things that the team just has completed. The Store O situation was the #1 thing that risked reaching 300 stores - in the Store O case there was a some kind of performance problem.

The team decided to try a couple of approaches to solve that problem. It turned out that one of those (the erased part) was quick to implement and solved the problem. So well in fact that they could now switch priorities and have a new #1 priority.

What I’ve seen is that many organizations locks down to a list of feature way too early. In some cases there’s 2 or 3 levels before it even reaches the product owner where specific features are discussed.

(Yes, yes… that’s not really a product owner I know - but that’s the reality for many product owners in big organizations)

The problem with this are many:

You are always late and behind. Hmmm… wonder why it’s called a backlog in the first place. Maybe because listing features is quicker than delivering them. And there’s always (always) more to do than we have capacity.

You’re timing is consequently always off. “Feature Y?! Now? That doesn’t help me now - I needed that last summer”

The real goal of the business is very subtle and hidden, at best. Sometimes I’ve had a really hard time to find anyone in the entire organization that knows why we are doing this feature now.

A simple way to see this is to try to create an impact map by walking backwards from the list of features you are working on now. I guarantee that you will find some things that you work on that is not related to the goal - or feel very strained to try to connect to the goal. Now - that might be ok for a while - we draw them next to our mind map. But we should at least make it explicit that they are not contributing to the goal.

Prioritization changes feels random and haphazard to everyone that is not aware of the goals. With the goals known and visualized, on the other hand, I’ve seen team totally change their agenda and backlog without anyone thinking that it’s at all strange.

In fact - presenting the backlog of a team as a list of feature means much less understanding and connection than to show it as a picture.

The work in the team is super boring. You are only using a fraction of their knowledge. Only doing what it says in the spec is not using the skills of problem solving or the innovation in the team. This was beautifully put by a team member in my current team:

Quite simple: wait with putting features in the backlog as long as possible. Features (or the WHAT part of an impact map) are just means to reach a goal - not the goal.