A walking retrospective that only turns up the good

Today with my team I tried something new for our retrospective. There were a few reasons for me trying something new.

Although I think that retrospectives are a fundamental practice of any agile team and the foundation for a continuous improvements mindset … I still think that I suck at facilitating them. And I cannot get excited about doing so.

Most retrospectives become a wailing-fest of the bad things that happens and very seldom leads to actionable small (!) items that we can implement to improve.

Also … I forgot to book a room after moving the retrospective in time.

These things led me to be a little bit innovative and we ran the retrospective today as described below.

The post will be the description of how to run the retrospectives, a few lines of correct attributions and then a few thoughts about why this worked. Because it was really good! Actually.

We gathered in our team area and I presented the questions that would form the theme for our discussion. Both of them at the same time:

What was the best thing we accomplished the last sprint?

What is the smallest change we can do to increase the likelihood of that happening again?

I then showed the team a well-known position on a map of Stockholm and said that we would go there and then back again. It was an easy stroll, about 15 minutes away through the lovely Stockholm weather and a park where the cherry blossoms were blooming. 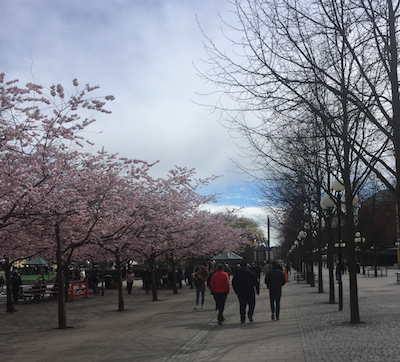 We divided the team up into groups of three people that I think is reasonable to be able to walk and still have a conversation.

And we set off. I secretly took the stairs and reached the main entrance when the groups (pretty confused and bewildered about this way of doing retros) went out. I did that to remind them about the thing that we were going to discuss while walking.

As they walked I joined one group and listen in on the reasoning. I’m part of the team too, you know!

When all the groups reached the designated location we had a short summary of each of the team’s discussion. We then reshuffled the teams again and walked back towards the office again.

This time I asked each group to come up with one single thing that we could try to become a little bit better during the next period (2 weeks).

Once we got back to the office we had another short round of presentation of ideas that came up in the final discussions.

We got three really good suggestions for small simple things that we could change to amplify the goodness we saw in the earlier period.

These ideas were mostly not my own. I put them together now, but they came from other places:

The idea of walking while talking is … as old as time. I’ve used that in a couple of other teams.

Limiting the scope and number of items to improve is based off an idea from Lean Startup and Kanban. Posing our ideas as experiments is more of the same, stemming from the scientific method.

This worked. Me and (I hope) the team felt invigorated and I think the ideas that we had was, for the first time, very actionable and small. Here are few things that popped up as potential reasons of this succeeding.

It’s really powerful. Get out. See new things. Walking and get some fresh air into your lungs. That’s good for you and your brain.

Turn up the good

Afterward, we reflected the shift in focus; only focusing on the good and not considering the bad. That sounds irresponsible, right?

But what I realized that one of the reasons that retrospectives, that becomes whining-fests, often doesn’t reach actionable results might be that;

Or if we find stuff that is positive but out of our control… well, we got an excellent opportunity to go over there with a token of gratitude. A cake for example. Further spreading positive thinking.