In my current job, as Head of Quality and Curriculum at </salt>, my thirst for being data-driven is frequently useful. In particular when it comes to test results for the developers in our courses. We test the developers every weekend (for 10/13 weeks) and we have now run 4 courses using the same tests… A gold mine of knowledge if you can mine it.

To help each developer and us, understand how they are doing we produce a diagram that compares their results to the result of their class (ca 30 people) but also compared to all classes (to date 4 x 30 people).

In the end we want to produce charts that looks like these: 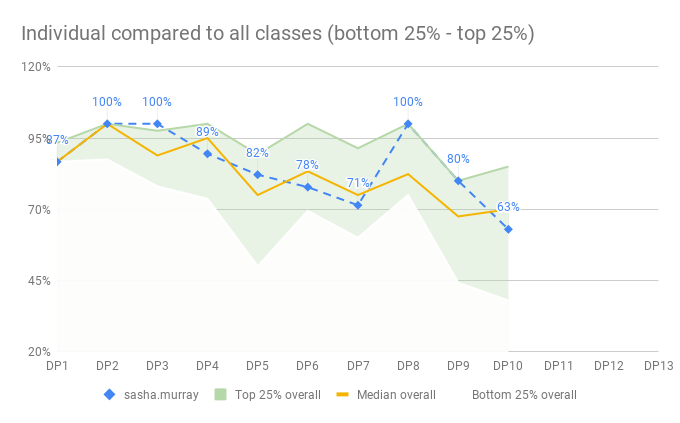 But getting there has been quite tricky but oh so rewarding. At the end of this blog post, the whole thing is fully automated and kept updated. I only need to add new scores… and one extra configuration row for a new class.

Percentiles for one class

To give an overview of how one developer is doing we compare their results to the rest of the class. But doing that for only the average result is not very helpful. Not even the median will help us here. We want something a little more open - like a span of results which helps us know if you are doing good.

I decided to calculate 4 percentiles, per data point. In these examples the data is located in the C-column:

If this is calculated per data point I can then get a line that represents each of those groups, across a chart of all data points. It’s then pretty simple to see how one person is doing compared to these groups.

Each test (aka data point) in the course has it’s own sheet and I then aggregate all of this data into on sheet with all the datapoints on. I’ve noticed that this is a good practice; keep the raw data on a separate sheet and then do aggregations separately.

With all that in place, I can then use the QUERY-function and get all the data structured like this:

That query is pretty simple actually:

Get me all the data for this person (name in B2) and then all the rows named Average, Median, Top 25% or Bottom 25%

From there it’s just a matter of selecting the data and create a line chart. It looks like this. 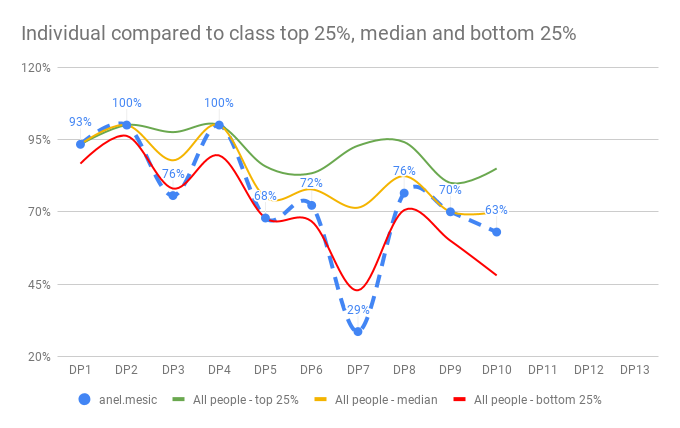 Much good. Much pride.

It’s really hard to see and make out a difference between the individual result versus the top/bottom graphs. Not to mention the median, depending on whose score we looked at.

What would be much better would be to create some kind of zone between the top 25% and bottom 25% with the median in the middle. Then we could plot the individual developer’s result and see if she falls inside our outside the zone. It was quickly nicknamed The Green Zone.

Getting there in Google Sheets graphs is not easy and this solution is not perfect but good enough. There are solutions that produce an even better looking, but they require coding that makes my dynamic nature of the data go away. Also - this is pretty good and only using standard features.

Here’s what I did

The result is pretty good actually.

One thing that I am not happy about, but it’s good enough, is that the lower area, in white, now covers the entire chart. The lines disappear etc, but that is ok as the individual score, in blue, still is visible on top.

Now we want to summarize the result of all classes - each class has a Google Sheet with their results stored in, and we need to get that data into one aggregated sheet where we can draw a chart, like the one for one class, but for all classes.

But first, let’s talk about summarizing the data. I consulted a friend and master-statistician; Dan Vacanti to ask how to summarize percentiles:

Dan, ever helpful, understood my question perfectly and said what I feared…

For the three classes, have you looked at combining all the data from all of the classes into one big dataset and calculating percentiles that way? That would be the thing I think I would look at first before doing averages of averages or percentiles of percentiles.

I feared it because I had no idea how to do that - but I also realized that he was right. Let’s get all the data together first and then calculate the percentiles, in the same way as for one class, but on the entire population of results.

IMPORTRANGE and QUERY to the rescue

It’s quite amazing because that function will now go out to the reference Google Sheet and import this range into the cell where you enter the formula. With =IMPORTRANGE("http://https://docs.google.com/spreadsheets/d/[id here]", "TestDataAggregation!B2:O38") in cell B1 we will get all that data imported.

I knew about IMPORTRANGE since before and I also knew about the powerhouse of a function called QUERY. QUERY takes a range of cells and then a SQL-statement. It’s crazy!? You can write SQL-statements on top of Google Sheets. I’ve used this a lot, for example in my Kanban Stats board, described in some blog posts.

But what I found out yesterday was how Google Sheet lets you combine ranges. Because I now had 4 sheets with data for each class that I wanted to, not only IMPORTRANGE but also combine into one big range. And clean up a bit, as we have some summary rows in the middle of the data (i.e. MEDIAN result per mob).

To my surprise and joy, this can be accomplished in one formula.

First, combining ranges can be done using the following syntax ={Range1;Range2;Range3}. This will create one big range with all the rows of Range1, Range2 and Range3 on top of each other. With 3 columns and 3 rows in each range, the result will have 3 columns and 9 rows. The ranges you combine need to have the same number of columns.

Note that ={Range1,Range2,Range3} instead will create a new result range with 9 columns and 3 rows. In this case, the number of rows needs to be the same in the ranges.

(If you, like me, couldn’t spot the difference… ; to append rows, , to append columns).

IMPORTRANGE gives us a range. And QUERY operates on a range. And now we know how to combine ranges. Which means that our resulting formula will look something like this:

I’ve formatted this for readability (pro tip: this can be entered like this using copy and paste). Let’s walk through it slowly:

And that is a wrap - we now get the data from 3 different sheets combined into one big range.

Calculating and charting the entire population

From here it’s quite simple and similar to summarize for one class the PERCENTILE per data point: =PERCENTILE(B2:B, 0.25) to get the 25% percentile, for example. I calculated the top 10%, top 25%, 50% (median) and bottom 25% percentiles, per data point for the entire population.

This gave me a table that looked like this:

With that in place, it was quite simple and the identical process of creating a chart with the green zone, for the entire population. Very much what we did above for the individual compared to the class. I will not repeat it here, as this blog post is get too long already.

This is actually really cool, because now the data is kept updated as we go. We only enter new data points when we run a test in a class and then all of the calculations are made for us.

I learned a lot in this process; how to calculate percentiles of big(-ish) data sets - don’t use aggregations of aggregations but rather go back to the raw data.

I’ve also learned how to create a chart that has a zone between two lines, to show a span of data. This has proven very useful for the conversations with the developers.

And I learned how to combine ranges using ={Range;Range} and then run a QUERY on the combined result.

I hope you got something out of this too.