Simple = Good. Complex = Bad. But what does it mean?

One such principle was something I picked up about 10 years ago and I’m still reaching for that everyday. Here’s my current desktop background, showing that principle to me everyday: 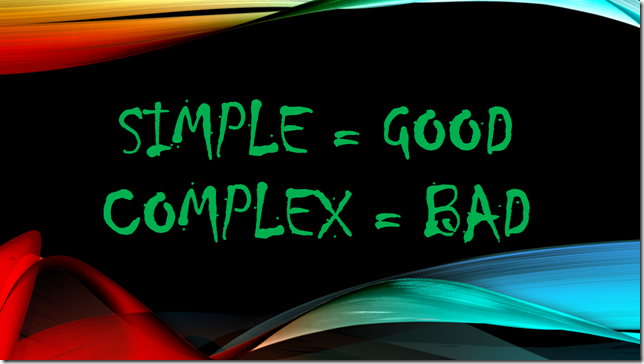 This is a so called truism that nobody says again, but I fail to reach just about all the time. I find it very useful as a guiding north star both in organizations and programming. But what does it really mean?

I have the good fortune to coach some managers in my current position and today we got to talk about that statement above with one of them. She obviously bought into that, as do we all, but I thought I’d try to explain what Simple and Complex mean for me:

To me simple is made up of two components (I think, might add  stuff here later): transparency and short feedback loops.

Transparent in turn means that the things we do is open and showed to others within our organization and as far as we think it’s reasonable. This is one of the principles we built Aptitud on and we’re pushing the envelope on this. You can see the way we calculate salaries on our website, every invoice is distributed to everyone in the company as are all the pay slips etc. etc.

By having the information as transparent possible (as suitable) people will start to ask questions. Because now they see the information in broad daylight, and they wonder why a number is like that, or they might know that statement to be changed, or they have an idea on how to improve on X. 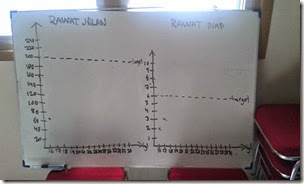 And for the record, an intranet will not be sufficient. Put it out in the hallway! Make it big! I dare you to do an experiment to measure the different. Create a beautiful page on your intranet with some important number visualized and pretty. Then try a really ugly, hand drawn diagram and put it somewhere where everyone pass (close to the reception?). Note the difference in the number of questions or comments. To the right is one example from yesterday.

Two very simple things that we have tried lately is:

Transparency is not only about visualization of course, although that’s really important for reach. It’s also a mindset to share information rather than keeping it to myself. And if you’re going to share the information people need to feel safe to do so. To me transparency without trust is not really worthwhile. Because people will not be transparent.

If you go “Show me the numbers!”, or “Mr Andersson! Why is the BOR lower today than yesterday?” – people will lie to you. They will tell you the numbers you want to hear. But if you want the truth you will also show the people that even bad news are welcome. Simon Sinek talks about the main task of a manager as being a safe environment. I think I kinda like that.

In my current team we try to solve that but often restating that;

There are no good or bad news. There are just news

I could go on for hours on transparency, but let me just leave you with one more thought; if you’re experience corruption in your organization, what would transparency do for you? What kind of questions would arise? What kind of information would be presented? What will the people involved in the corruption do?

Transparency is a powerful tool. Using it will uncover things. Are you ready to handle that? 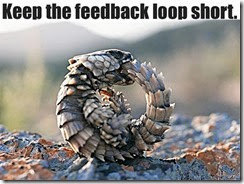 The other part of Simple is to me short feedback loops. For example, when we create the board with task as above, we meet daily to talk about it. This has a number of advantages over meeting once a week:

Funnily enough; if you meet seldom you can go through that list and make the opposites… And you control the dial for that too.

There’s been miles of text written about meeting daily so lets just focus on the last bullet for now.  This connects the short feedback loops with the other part of the heading – making things concrete often.

When doing software development nowadays we try to make things concreter earlier by for example:

Let’s note two things about the lists above but not by doing another list, shall we:

But they will be smaller. The longer you wait – the bigger the problem. You control that dial. How much are you willing to pay (to call the meeting, do the reporting, create the automation) to not have big problems, but rather small? This is a business decision. Here’s an example from the world of accounting.

If you post the cash to the bank everyday you get an opportunity to check, that your accounting is correct according the actual cash, once a day. If it’s totally wrong it’s still just a problem that; occurred during the day, firstly, and only during that day secondly. Since it occurred during the day you remember it pretty well (I hope

). Since it only occurred during the day in question the problem cannot be that complex to untangle.

On the other hand: if you post to the bank on a monthly basis, you get the opportunity to verify your accounting against the concrete money once a month. Any  problems might have grown big and you will have a hard time remembering what you did up to 30 days back.

Doing the work will take some effort but be faster

Creating this kind of fast moving processes, or creating the possibility to have short iterations is hard work. Sometimes. For example, creating automated tests for your entire system will take a lot of time. Especially if you haven’t written tests from the beginning. Or creating an automated process to create financial statements will not be easy to start.

Ok, that was the Simple part - Complex then, what is that?

Well… it’s basically the opposite of the above:

Dude, you lost me… Can you sum it up again?

I’ve for both programming, life and in management of different sized organizations followed the principle of Simple = Good, Complex = Bad. That is I always try to simplify things, even the things I’ve simplified. I’m never done. I hope.

Simple to me means transparent and doing things in short iterations. Transparent so that as many as possible knows the information and can see it, think about it, question it and suggest new ideas. And feel safe doing so. Short iterations so that we quickly get feedback on our actions, so that we’re rather working with small things quickly than big (or a lot of small) slowly.