Barrier troops
I’ve been rereading the awesome ReInventing Organizations by Fredric Laloux. The first chapter in particular is awesome. It’s a history the evolution of organizations through history. What I like about it is that it highlights both the strength and weakness of each new stage of organizations. As I was reading about Amber-Conformist organizations (think strict hierarchical, big organizations) I had train of thought that I wanted to share, as I’ve during the last two years experienced much of those types of organizations myself. My point here is that I’ve also seen residues of this kind of behavior in modern organizations. I think it can be useful to notice it and do something about it before it gets… nasty as we soon will see.
Agile, Lean, Life of a consultant

I’ve been rereading the awesome ReInventing Organizations by Fredric Laloux. The first chapter in particular is awesome. It’s a history the evolution of organizations through history. What I like about it is that it highlights both the strength and weakness of each new stage of organizations.

As I was reading about Amber-Conformist organizations (think strict hierarchical, big organizations) I had train of thought that I wanted to share, as I’ve during the last two years experienced much of those types of organizations myself.

My point here is that I’ve also seen residues of this kind of behavior in modern organizations. I think it can be useful to notice it and do something about it before it gets… nasty as we soon will see.

As can be deduced from it’s name “Amber-Conformist”1 organizations value compliance and that you are doing as told. The thinking, decision making and authority in these types of organizations are done at the top of the pyramid. As you descend the pyramid less and less authority is given and less decision and thinking is expected. On the lowest level there’s only action.

To be able to scale this to many people it’s vital that everyone follows the procedure and just do what’s expected of them. Indeed, as I’ve blogged about before, I’ve been scolded many times for not doing that. I have many emails in my inbox telling me to:

At first this can seem puzzling and, trust me, very frustrating. But once you start to think about where this kind of organization stems from and where they have their strength it becomes more understandable. Although I still think the whole scheme is wrong and degrading to humans.

Mental pictures and some violent history

Mr Laloux attach a metaphor or mental picture to each stage of evolution for the different organizations, to easier remember them by. The picture for Amber-Organizations is an Army. In my mind I’m seeing a Roman army facing another in war. Those kinds of armies.

Let’s see if we can understand the behavior like “Please don’t question the process”, “Don’t think we’ve done that for you” etc in this setting.

Imagine the army on the battlefield. The front line consists of foot soldiers, armed with swords and shields. Their job is at a given signal charge the enemy army. That most likely had a similar setup. Probably the front line soldiers would be fighting in a rain of arrows too. The odds of survival for these troops should be very low. In fact, as I understand it, often slaves or prisoners was put in these positions.

Now imagine if these troops started to think for themselves. I know what I’d think: “Get me out of here! I’m running the other way!”. That would have devastating effects on the effectiveness of the charge of course, breaking the line and opening gaping holes for the enemies. It only works if everyone just follows the procedure and does what they are told.

I’ve often thought about how they managed to keep the panic under control in these situations. Why didn’t people just run away? Until I heard about Barrier Troops. This was something that many armies through history used, even up to the Second World War.

The idea is brutally simple; right after the front rows (that likely panic and turn around) we send in some people whose job it is to threaten or kill anyone that turns around. Everyone in the front row knew about these troops, of course. You could either face the very slim odds of surviving up front, or turn around to face certain death from the Barrier Troops.

Ok, that was indeed nasty and horrible. Let’s leave that era. Surely something like that is ancient history and not around today.

Well, true… but in the Amber-Conformist type of organizations I’ve been working in the concept is still there. There’s rewards or punishment for example. I’ve blogged about a situation where nurses knew that they were going to get deducted pay if they didn’t follow procedure. So they didn’t wash their hands. Because that wasn’t in the procedure. Quite natural and understandable. And stupid.

Amber-Conformists answer to this is of course that the procedures is not sufficient and needs to be updated (indeed that was the initial reaction in that case too) I’m thinking that we can never write down everything. Some lay-way and authority needs to be given on the lowest level.

You can surely come up with other examples in your own context; being held responsible for estimates you’ve made, given deadlines that you didn’t set, yearly bonuses, etc. etc.

What’s the connection between this kind of behavior and the barrier troops? Or put differently, and a bit sad; why (or rather where) does this work?

Because it does. Many Amber-Conformist have reached surprisingly good effectiveness and size. Take you old school bank or any kind of global company up to 1950. They run like this.

The common denominator is Fear. Barrier Troops worked great (in the sense that people were charing the other army without questioning) because they were afraid. The bonus / punishment system in place in many organizations to this date is driven by fear. “If I don’t do great I’ll loose out on the bonus”.

In Asia I’ve seen entire cultures driven by Fear: “I cannot speak up to this older / high ranking / respected person, even though I know that his wrong - how will that look.”

Let me give you two examples from modern age. One if funny and one is scary. I’ll take the scary first and end on a high note, ok?

Singapore is an awesome country in many regards. The development done there is truly amazing from the 1950-ies up to now. Coming from Indonesia to Singapore (3 times) is unbelievable. Just 2 hours from Indonesia you have a place where everything works as intended. Indonesia is often the opposite, sadly. 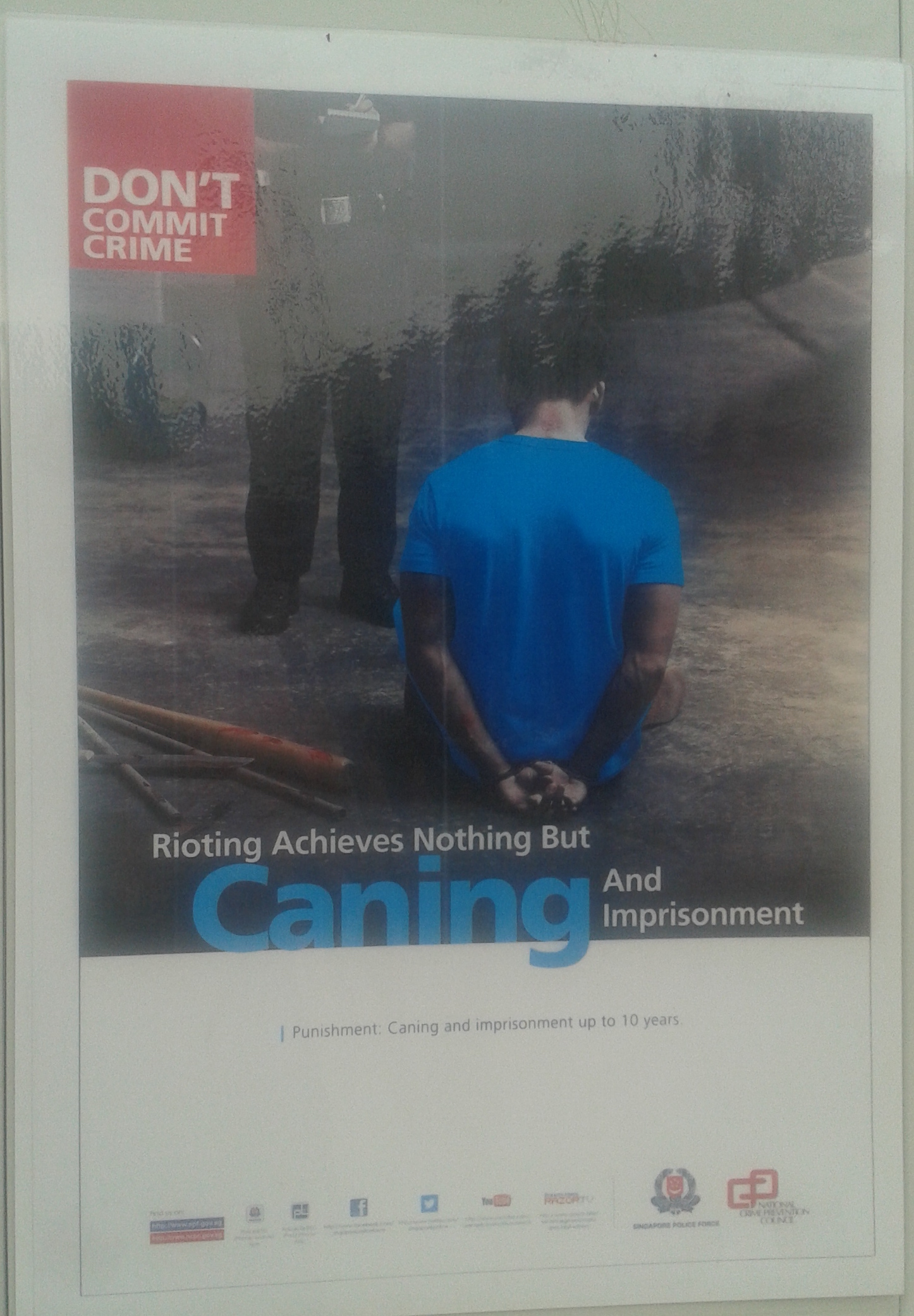 But after I, being a Swede, has been in Singapore for a couple of days something is not right for me. There’s so many probations. There’s signs and warnings everywhere and they are all “Do Not”. No “Do”.

Take a look at the sign, on the left, that I photoed during the New Year 2015 Celebration. Singapore also famously have the worlds cleanest streets. Why? Because there’s a hefty fine (500 Singapore dollars?) for littering.

Don’t get me wrong. Singapore works great. Among the top nations in the world, even. The health care, there is amazing. It’s clean and everything works.

But all those probations and “do not”’s what are they communicating. Through what mean is the goodness and culture kept in place? Fear? Sadly, that’s what I read between the lines.

I heard a funny story, that turned out to be true about Korean Airlines. For a period in time (don’t know when… 70–80-ies?) they had a really bad reputation. They topped the list of recorded incidents for any airline around the world.

They decided to do something about it and started to analyze every incident to find common problems. You know what they came up with? Culture. Respect for senior / higher ranking people in the organizations.

Lower ranking staff didn’t dare to speak up to senior staff, due to the honor culture that govern many Asian nations. It in itself is of course nothing bad, but it’s consequences once gone to far… devastating.

One famous example shows the co-pilot noticing that the plan is flying to low. He doesn’t say anything, because he is not the captain of the plane. Surely the pilot notice this. He’s older and wiser.

After awhile no correction of altitude is made and the co-pilot is starting to get very nervous. There’s high mountains all around them. Instead of embarrassing the captain by making clear that he’s making mistakes the co-pilot wants to draw the pilots attention to the problem, so that he can solve it himself.

The co-pilot solution, recorded on the flight system, is to simply say:

I say. What a nice scenery it is around here, don't you think Captain?

A very near accident is avoided only by the pilot doing a strong evasive maneuver.

Fear of speaking up is holding quality back. In this case the quality is “don’t crash the plan into the nice scenic mountain coming up”.

There’s many displays of fear, even in modern organizations today. I think it’s not only holding the organizations back, keeping unused potential literally locked in by fear. But also, many people in those organizations are living unfulfilled lives.

Even though it can be hard to see sometimes but we need to scratch the surface and challenge the reason for this fear to be around. It’s not needed.

You fight Fear with two things; Love and Trust. It’s easy. Let’s do it!